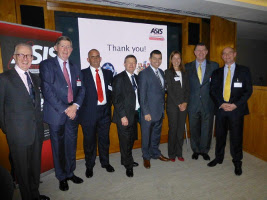 The event hosted by Nomura was organised by Andy Williams CPP and Crawford  Chalmers CPP who both worked extraordinarily hard to make the event the success it was.

The event was sponsored by Global Aware International and Ultimate Security Services, who covered all the catering costs, meaning that the entire ticket price went to the charities.  There were also many donations of raffle prizes and items for auction, run by Andy Bignold.

The Chapter was delighted to welcome Lord Imbert and Commissioner Leppard from CoLP along with representatives from the charities.

The final figure raised is still being determined but it will be in excess of £13,000, which will be split evenly between the two charities.

Massive thanks are due to all those who supported or attended the event.

The UK Chapter of ASIS International