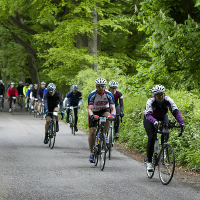 Over 2,000 cyclists came together this weekend for the MITIE London Revolution, a 180 mile cycle ride around London.

The route took in iconic London landmarks, scenic back roads, and historic Olympic venues, such as the rowing lake at Eton Dorney and the Herne Hill Velodrome.

The cycle ride was sponsored by the FTSE 250 strategic outsourcing company MITIE, in association with its charity partner for the event, City Gateway, which aims to help unemployed young adults in London, offering training, mentoring and opportunities for apprenticeships.

The partnership, which is part of the Evening Standard’s Ladder for London campaign, reflects MITIE’s continued support in providing people of all backgrounds the opportunities to get into work. As part of the programme, MITIE has taken on 12 apprentices and fundraised over £30,000 towards its £50,000 target for City Gateway.

Over 250 MITIE people took part, either as riders or volunteers, at the event which was organised by Threshold Sports, the sports marketing agency co-founded by double Olympic rowing champion, James Cracknell.

Of all the cyclists who took part in the challenge, 97% crossed the finish line, including former Olympic heptathlete, Kelly Sotherton, who won a bronze medal in the 2004 Olympics and gold in the 2006 Commonwealth Games.

Between them the MITIE riders cycled over 31,000 miles, a distance that would get them more than once around the world purely through pedal power.

Ruby McGregor-Smith CBE, chief executive of MITIE, said: “The MITIE London Revolution was a great way to connect with social enterprises to create positive change through sport. It has also helped to challenge our employees to think more about their own physical and mental health.

“With one in four young Londoners currently unemployed, charities like City Gateway provide a brilliant start for young people to get the skills they need, as well as helping secure the future of companies like MITIE.”

MITIE employs over 70,000 people in the UK and Europe and recognises the value of health promotion in mitigating both the human and business cost of ill-health. The MITIE London Revolution has formed part of a wider campaign to provide resources and incentives for MITIE people to think more about their individual physical and mental health.