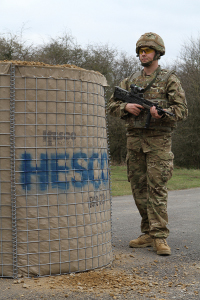 The ‘next generation’ of protective barriers designed to meet the civilian and military needs of the future are being unveiled to the South American market at LAAD 2012.

HESCO – the world renowned manufacturer of protective barriers – will be displaying a high security fence designed for events such as the World Cup and a quick-to assemble and disassemble military barrier for the security and defence market.

HESCO is known around the world for inventing the most advanced field fortifications since the Second World War – and for being the biggest supplier of barriers to Western forces in Iraq and Afghanistan since the 9/11 attacks.

Unusually for a high security fence it also acts as a physical barrier for medium sized vehicles and is ideally suited to international events that require protection, such as the football World Cup, Olympics or a WTO conference.

The recoverable Mil unit is based on the existing HESCO barrier but includes a ‘quick release’ pin system that allows it to be quickly emptied and collapsed.

This means when removed there is less bulk waste to be disposed of, reducing the impact on the environment. 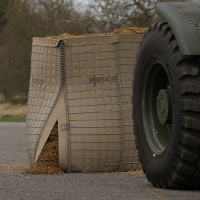 Jake McQueen, HESCO’s South American regional manager, said: “Military and security challenges have evolved significantly over the last ten years and these products are designed to meet the changing needs of our clients.

“With expeditionary warfare becoming increasingly expensive, the recoverable Mil unit provides an environmentally cost effective solution that is easy to use and doesn’t make an indelible mark on the landscape once the conflict is over.

“The HRSF has also being designed with the changing nature of conflict in mind. Whilst inter-state conflicts have declined, major events and critical national infrastructure have now become the focus of organised disruption, and the HRSF offers an extremely robust and rapidly deployable barrier.”