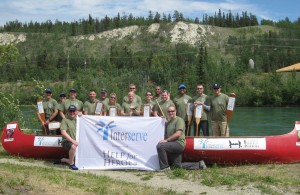 Interserve, the international support services and construction group, is set to smash the target for its Yukon River Quest in aid of the forces’ charity Help For Heroes by over £50,000 as its two teams return successfully from their epic Canadian adventure.
The Yukon River Quest, known as ‘The Race For The Midnight Sun,’ is the longest annual kayak and canoe race in the world and in its 15th year. Fifteen intrepid paddlers from Interserve made up two teams to undertake the mammoth feat, rowing 715 km from Whitehorse to Dawson City against 66 other crews from across the globe.
The Interserve teams manned two 26 ft. Voyager canoes to complete the race in less than 50 hours and are on track to raise over £150,000.  Racing day and night, the teams only had ten hours rest throughout, with the first stretch of the race lasting a solid 27 hours.
Racers had to battle endure heat in the mid-30 degrees, battle through mosquitos and tackle the famous Five Finger Rapids. Although the conditions were hard, team two finished in 49 hours and 28 minutes, achieving first place in its class and ninth position overall.  Team one was not far behind, completing the race in just over 53 hours, to claim third place in its class and 25th position overall
Tim Smith, Strategic Business Director at Interserve, one of two team captains said: “The Yukon River Quest has been a incredibly tough mental and physical challenge for everyone involved.  When we competed last year one of our teams was unable to finish the race, so it’s an even greater achievement that both teams crossed the finish line this time around.
“Remembering that we were taking part to raise money for Help for Heroes, our chosen employee charity for 2013 certainly helped to spur us on.”
Bryn Parry OBE and Emma Parry, founders of Help for Heroes, said: We’d like to take this opportunity to thank the Interserve staff who have put their own comfort aside to raise money for Help The Heroes.  To take part was no small feat, but to raise so much money for our charity in the process is fantastic and every penny will go towards helping improve the lives of wounded servicemen.  The team members have really done us proud and are a true inspiration.”
Those interested in sponsoring the team can donate by visiting http://www.bmycharity.com/InterserveYRQ2013 or by texting BATH91 to donate £5.
Subscribe to our newsletter