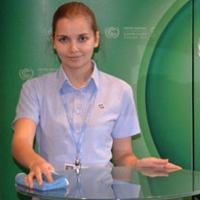 The 19th Conference of the Parties to the United Nations Framework Convention on Climate Change was held in Warsaw, Poland and ISS employees were there to take care of the participants.

In November, in connection with The 19th Conference of the Parties to the United Nations Framework Convention on Climate Change held at the Polish National Stadium, about 240 people representing ISS each day took care of offices, conference rooms, plenaries, technical and social areas to assure comfort for the almost 20,000 participants and service staff.

Conference participants discussed the global climate changes and its consequences. Governmental and non-governmental organisations from all over the world tried to establish a model of international cooperation to limit negative influence on environment. During the COP19 meeting a lot of information initiatives were launched to spread important climate and environment changes facts between all the people present at the Stadium.

Such initiatives are close to ISS global activity and as a member of the United Nations Global Compact, ISS is always trying to minimize the impact on the environment. ISS organises information campaigns and training for employees locally and globally, consequently ISS is proud of being a part of the technical staff during COP19.

“ISS Poland has provided cleaning and support services to the National Stadium since EURO 2012. Each event is different and requires a specialised model of service provision. COP19 was the first one that took two weeks and the preparation period was more than one month. Three site managers, 29 operational coordinators and five administration coordinators were responsible for providing the highest quality of the service. Execution of all ISS duties required 24 hours a day working time. We are proud that ISS was the best technical support provider during the event reaching the score of 98% of effectiveness in the first week of the event and 99% in the second week measured by National Stadium’s KPIs. On behalf of the Board Management as well as Regional Manager and Site Manager responsible for National Stadium contract I would like to express gratitude to all the staff involved in the project for their commitment, flexibility and willingness to work.”