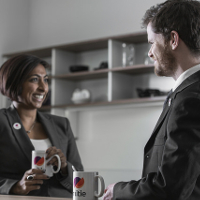 Mitie, the FTSE 250 strategic outsourcing company, has converted part of HMP Brixton into a high end restaurant run by some of its prisoners, in partnership with The Clink Charity and Her Majesty’s Prison Service (HMPS).

The company refurbished the entire ground floor to accommodate a 120 seat restaurant.

The restaurant is linked to a professional kitchen, a private dining area for up to 24 guests, and a meeting room to seat 12. The two floors above provide a further three rooms for business meetings.

Mitie already delivers a range of services at HMP Brixton, including mechanical and electrical maintenance, cleaning, catering, laundry, and project works, and was approached to lead the refurbishment project.

The 12 month project encompassed a full refurbishment of a listed three-storey building in the former Governor’s House, which had been used as storage and administrative space.

The Clink Restaurant at HMP Brixton will train up to 28 prisoners at a time in a professional true-to-life restaurant environment. Prisoners are given the chance to gain nationally recognised City & Guilds NVQ qualifications in food preparation, food service and cleaning, as well as experience working in a fast-paced and fully operational business environment.

“I’m delighted that we could be involved in this pioneering project at HMP Brixton. We’re really pleased to have further enhanced our partnership with HMPS, and to have helped bring to life the excellent work that The Clink Charity is doing in the rehabilitation of prisoners.”

“With the support of Mitie, the Governor’s House has been transformed into a fully functional restaurant, kitchen and meeting rooms that enable us to train up to 28 prisoners, in food preparation and front of house service, at a time. It’s important to the charity that we have partnerships with organisations like Mitie who understand our vision and can help bring the project to life. We hope to work together again on future Clink initiatives.”

The Clink Restaurant at HMP Brixton is the charity’s third training restaurant in a programme of ten expected to be operational by 2017. The first Clink restaurant opened in May 2009 at HMP High Down in Surrey and a second was established at HMP Cardiff in September 2012. To date The Clink Charity has trained over 500 prisoners and released 106 into jobs, with only six reoffending compared to the national average of 49.6% of adults who reoffend within the first year of release.