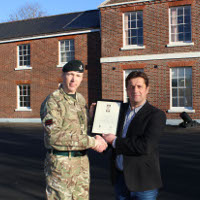 Exeter based security firm Marsh Barton Security Services (MBSS) has been awarded the Defence Employer Recognition Scheme Bronze Award for its support and commitment towards UK Defence and members of the Armed Forces Community including Reservists.

The Employer Recognition Scheme, set up in 2014, rewards UK employer organisations which pledge, demonstrate and advocate support to the Defence community and align their values and activities with the Armed Forces Covenant, a public, voluntary pledge to help organisations express the ways in which they can provide support to Defence.

Marsh Barton Security Services is one of just three Exeter based businesses to have achieved the Bronze Award, and the firm has committed to ongoing support of the Armed Forces and Reservists, with a view to increasing its status to the Silver Award later this year.

To achieve the Silver status, MBSS will need to prove that they employ at least one member of the Armed Forces Community, such as a Reservist, Service Leaver or Cadet Force Adult Volunteer, and actively communicate and demonstrate a positive stance towards that employment via established HR policies and procedures. They must also support any employed Reservists, or Cadet Force Adult Volunteers, by showing flexibility to plan for and allow them to fulfil their annual training and mobilisation commitments.

Managing Director of MBSS and Ex-Royal Marine, Marcus Di-Vincenzo said: “I wholeheartedly support the Armed Forces community and am therefore very proud to have been recognised with this Award.

He continued: “We have several Reservists in our team and having been in the Royal Marines, I would actively encourage my work force to consider signing up. Our next aim is to go for the Silver Award to demonstrate our ongoing commitment, which we hope to do later this year.”

The Employer Recognition Scheme has received a positive response since its launch last year, with over 500 nominations from Reservists across the Armed Forces community. The MOD scheme is run regionally by SaBRE, Supporting Britain’s Reservists and Employers, a Ministry of Defence campaign set up in 2002.

Julian Brazier TD MP, Minister for Reserves said: “I am delighted with the positive response to the Defence’s Employer Recognition Scheme, launched by the Prime Minister in 2014. I am very happy that MBSS were awarded Bronze at Wyvern Barracks on 19th January 2015 in recognition of the high levels of commitment demonstrated towards Defence personnel. Their commitment and support towards Defence brings many opportunities for strong mutual benefits and we look forward to recognising many more employers in future.”

Jon Beake, Regional SaBRE Campaign Director at Wessex Reserve Forces’ & Cadets’ Association said: “The interest in the Defence Employer Recognition Scheme demonstrates the high levels of employer support towards Defence personnel, including Reservists, Armed Forces Veterans and their families, and Cadets. We value the commitment and support of MBSS here in Exeter and are keen to work with them, and other employers, to build further support for mutual benefit and look forward to recognising them with the Silver or Gold level Awards in 2015”

Wessex Reserve Forces’ & Cadets’ Association is a community-based regional organisation which has a statutory remit to advise the Defence Council on Reservist issues, independent of the Ministry of Defence.

The Association promotes Reserve Forces and Cadets in the South West of England to facilitate better dialogue and understanding between military and civilian communities.

MBSS is a full service security firm that has been trading for over 30 years. The company was bought in May 2012 by Ex-Royal Marine Marcus Di-Vincenzo who has significantly raised the profile of the organisation and completes all work with military precision.