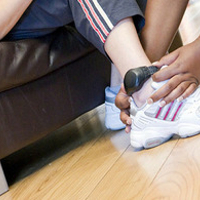 New satellite technology that will help track the movement of offenders in the community is set to be delivered by two British businesses, it has been announced.

In a boost for the economy the high-tech equipment is earmarked for manufacturing in a British company based in Nottingham.

Once off the production line and strapped to an offender’s ankle, the kit will mean suspects can easily be identified as having been at the scene of a crime or quickly eliminated from inquiries, delivering swifter justice and saving valuable police time and money. Existing technology only allows monitoring officers to see if a subject is within a short range of a base station installed in their home.

With delivery split across four contracts, one of the preferred bidders, Buddi, a family-run British company, could now work alongside three other organisations, including British firm Capita, to develop and manufacture the new technology. Two international companies, Astrium and Telefónica, have also been announced as preferred bidders.

All four faced-off strong international competition to deliver the contracts. They are now set to work together to deliver better supervision of offenders at a lower cost than the current contracts.

‘Today’s announcement is the start of a revolution in how we supervise offenders. We are now going to be able to track offenders wherever they go, twenty four hours a day. And we will be able to stop them going to places we don’t want them going to go – like paedophiles hanging around outside schools. All of this is going to be done with world class British technology designed and built by the kind of business we want government to work with more.’

With Buddi forming part of today’s announcement it sends an important message to the market – Government is serious about making our contracts accessible to Small and Medium Enterprises (SMEs).

While the new contractors are rolling out their monitoring scheme, the current suppliers, G4S and Serco, will continue with their existing contracts for a transitional period to ensure operational continuity.

Satellite tags will help us cut crime, create safer communities with fewer victims and ultimately offer greater protection and reassurance to the public.