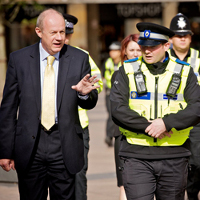 Damian Green met neighbourhood officers to discuss local challenges and find out more about new hand-held scanners are allowing officers to check fingerprints against national databases without returning to the station.

The Police and Criminal Justice Minister said: ‘I want the police service to have the best tools and training to do their job and it is through innovations like this that police forces can get the most out of their officers and staff and increase their service to the public.

‘I don’t want officers to be bogged down by red tape and form filling and our radical reforms will ensure officers are free to do what they joined the police for: fight crime.’

Later that day he spoke to officers at the Police Superintendents’ annual conference where he promised to act as a ‘candid friend’ of the service and of the need to continue the excellent relationship between police and the public which has been boosted by the Olympic and Paralympic Games.

He said:’A healthy society requires the police and public to be at ease with each other, and the triumph of the policing operation at the Olympic and Paralympic games is testament to this.

‘Visitors to Olympic Park and other venues, spectators at the torch relay, and tourists or residents of London were only able to throw themselves into the spirit of the games because of the work that dedicated officers were doing quietly behind the scenes.  I want this easier relationship between the police and the public to be one of the legacies of the games.’

The minister spoke the day after the Home Secretary addressed the conference in which she outlined how government reforms to policing would benefit both the public and the police.