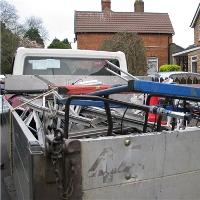 Avon and Somerset Constabulary stopped 126 vehicles over three days of action under Operation Tornado last week, to enforce the recent changes in legislation under the new Scrap Metal Dealers Act. Working with partners including VOSA, HMRC, Calor Gas, Department of Work and Pensions, Environment Agency, Trading Standards and several local authorities, officers across Bristol and Somerset were out stopping mobile collectors to check their licences and documentation.

So what’s new?
The Scrap Metal Dealers Act 2013 came in to force on October 1st and local police teams have been educating metal collectors and scrap yards over the past two months explaining how it works and what they needed to do before December 1st when the enforcement began. The legislation requires anyone trading in scrap metal to keep records of all transactions, copies of I.D and ensure that all payments are electronic, rather than cash. Mobile collectors also have to apply for and display a Mobile Collectors Licence.

What happened?
Over the three days of action, vehicles were stopped at locations in Avonmouth, Lawrence Hill, Weston-super-Mare and Yeovil. In Weston, three vehicles had their loads seized and sold, one vehicle was found to be so unsafe that it was immediately taken to a yard and scrapped. Two vehicles were also found to be using red diesel illegally and one driver was fined £535 on the spot.

In Bristol, one driver was fined £300 for not having the correct licence, one was arrested for disqualified driving and another had a warrant out for his arrest for a previous offence. In Avonmouth one driver had their load of metal seized and sold as they were breaching the new legislation and another was fined by VOSA for having an insecure and unsafe load. Another man was also given a caution for being in possession of cannabis. In Yeovil there were no seizures of metal but the Environment Agency are now investigating a suspected illegal scrap metal site and one man for illegally carrying waste. One driver was fined £300 for driving without insurance.

Across all the locations over the three days of action, VOSA issued 45 vehicles with prohibition notices, the Department for Work and Pensions have 16 cases of potential benefit fraud that they will be investigating, HMRC are looking into over 15 suspected offences , the Environment Agency also picked up three potentially unlicensed scrap metal sites, Environmental Health found four potential offences and Calor Gas were able to seize a number of stolen bottles.