Peter Webster, chief executive of Corps Security, a regular Infologue.com blogger, discusses regulation and licensing in his latest blog. Peter writes: “Firstly I should say from the very outset that, personally, I am a supporter of regulation. As an industry trusted to keep people and property safe we want to be regulated and, indeed, I’ve never met anyone who has advocated deregulation. However, we must be careful not to over-regulate.

“I should also say that I am heavily in favour of the current system of individual licensing, as administered by the SIA. An SIA licence gives an individual a passport to employment, meaning he or she can work anywhere in our industry.

“This is undoubtedly a good thing for both employees and employers. While it gives individuals freedom to work across our industry, when someone comes to us with a licence we know they have been vetted and trained to a basic standard and checked by SIA.

“If I am to be critical of the current system, however, it is that it isn’t publicised enough. The wider public needs to understand that the SIA exists and gives a licensing framework for the industry. And when I say public, I include those that purchase and use security services, and the wider public.

“Indeed, I fear that the wider public has a stereotypical image of a security guard, fed by portrayals in the media and fictional drama, as an unhelpful jobsworth, or lazy and disinterested.

“This does a great disservice to the more than 300,000 people who work in our industry, are licensed and, by and large, are engaged and serious about the job that they do. As it is, the negative perception of security in society reflects on our people and creates a downward spiral of low self-worth which in turn invites lower standards and impacts on professionalism.

“We need to flip this spiral around and build pride in our industry and the work that security guards do. Awareness of individual licensing is key to this. With the police service facing financial pressures, the security industry plays an increasingly an important element in the National Security Infrastructure. If the public understood the process of licensing and regulation I am certain there would be more respect for the industry and a better understanding of the importance of its role.

Business Licensing
“Now many of you will know that I am strongly against business licensing, the spectre of which continues to loom large over the industry. While some regulation is good, there is no justification for increased and unnecessary regulation: the last thirty years have seen business and government trying to deregulate wherever practical and possible. This goes against that trend.

“Readers of my blog will know why I think it is wrong for our industry. Quite simply, I have not come across a convincing argument for it. Fundamentally, business licensing will create a greater burden on business, and at additional cost, for an already financially challenged industry.

“Equally, I fear it is a step towards increasing the administrative burden on businesses, and away from the SIA. Indeed, this is shown here in black and white on one of the SIA’s own charts from 2015. It’s also interesting to note that this chart in fact shows a decline in regulatory responsibility as the SIA transfers responsibilities to industry – is this really what we want?

“In short, business licensing would be another step towards increasing the costs to the security industry whilst also transferring administrative responsibility to businesses, as we have seen with the ‘Licence Management’ scheme. 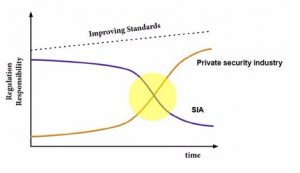 “On a practical level, company law already exists to address illegal activity and, bearing in mind that even non-executive directors currently must have “non-frontline” individual SIA licences, do we really think that business licensing would improve on that level of vetting? And do we not think that the criminal fraternity is not clever enough to get around this? If criminals can successfully launder billions of cash in drugs money, do we really think a determined criminal organisation won’t be able to get around a self-administered vetting process?

“Of course this means that, while business licensing would increase the burden on law abiding business, any unscrupulous organisation would not apply to the legal requirements anyway – so in fact the only companies really affected would be the honest and legitimate ones.

“Finally, it strikes me that business licensing is simply unworkable. How will business licensing address the complexity of brass plaque organisations, or companies with overseas shareholders? How can you insist on regulatory checks on shareholders in a Belgian-owned business, or a holding company domiciled in Luxembourg?

The Approved Contractor Scheme
“Now there is of course already a form of business licensing in existence, in the form of the Approved Contractor Scheme (ACS). It is only voluntary, and I know it has many detractors. But it is actually a hell of a lot better than not having a scheme at all, and I think it can serve a great purpose for our industry.

“If we had a proposal to drop the proposed business licensing, but developed a mandatory ACS scheme, I could live with that. Because all the reliable and trustworthy companies are in ACS anyway, membership of the ACS would only be a burden to the fringes of the industry that the SIA is seeking to eradicate.

“Indeed, in many respects ACS status provides a level of rigour that I, for one, welcome. For example ACS requires vetting to BS7858 which is far more robust than SIA licence requirements, as it looks at five year employment histories, for example.

“Now I’m not saying the ACS cannot be improved, and I think we can indeed make it stronger. I know there are issues around how the scheme recognises self-employment, for example. But I believe that our industry and regulator working together can create a continuously improving scheme.

“But like much of the good work of the SIA, the unfortunate thing about the ACS is that it is not widely understood. So we have a great opportunity to enhance the reputation of the SIA, the ACS, and thereby the industry. To do this we need to ensure that the market and public at large knows that ACS exists, and that it is an externally-measured assessment of a business against defined standards. But it needs more buy-in and to be understood better.

“How might the ACS be improved? Well, we should consider how it might be used to drive improvement across the industry – and drive out those on the fringes of the industry that proposed business licensing as meant to address.

“At this point I should add I firmly believe that the ACS scheme should remain under the control of the regulator, and not be handed over to industry. This leaves the industry free to drive the improvement I talked about earlier.

“However, one of the things we have at the moment is that, while ACS companies are listed, these could be companies with a score of 1, or 174. You wouldn’t know which was which. I know that this is by design, but with a mandatory scheme we can start to differentiate.

“The ACS should encourage companies to strive to continuously improve their score. While we don’t need to publicly compare actual scores, we have the opportunity to band companies – for example into bronze, silver, and gold, categories. Of course, those companies that have strived to get to a certain standard and achieved excellence can use their banding to differentiate their services in the quality end of the market.

“Finally, we need to ensure that the market, the buyers of security services and the wider public, know that ACS exists, and the value that it brings to the security industry.

Final thoughts
“Our industry plays a key role in keeping people and property safe around the UK and, at a time when police budgets are under considerable pressure, our industry’s importance to the UK security infrastructure cannot be underestimated.

“I firmly believe the SIA should remain part of the Home Office, and maintain control of the ACS. As an industry, however, we have to better control of our image and do more to make those in industry buy into it – and help the wider public recognise the industry’s importance and appreciate its value.