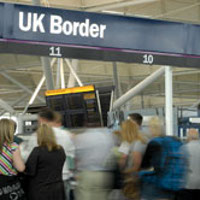 Passport control staff have been praised after new statistics showed they outperformed all targets for processing passengers arriving at Heathrow during July.

Data published by BAA has confirmed that, despite the influx of visitors for the Olympics, queuing time targets were surpassed at all terminals for both EEA and non-EEA passengers.

Immigration Minister Damian Green said: ‘These figures are proof that our detailed planning for the Olympics, combined with wider action to cut queuing times and keep the border secure, have paid dividends.

‘Our staff and volunteers have shown fantastic dedication and commitment during what has been an extremely busy period.

‘Queues at Heathrow have been almost non-existent and athletes and visitors from around the world have received a welcome of which the country can be proud.’

Planning for the Olympics

Planning for the Olympics began nearly two years ago. During the Games, in addition to having every immigration desk manned at Heathrow during peak times, Border Force has been working closely with BAA and updating its plans as airlines confirm passenger numbers and arrival times.

To ensure Border Force sustains this excellent performance in the post-Olympics period, the organisation has been recruiting additional officers for several months. At Heathrow, a new central control room now continuously monitors passenger forecasts and ensures staff, including 16 mobile teams, can be rapidly deployed across the airport wherever they are needed most urgently.