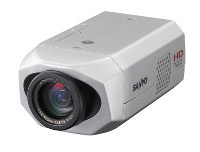 On a quintessentially English estate, up a picturesque winding driveway on a hillside at the edge of the Cotswolds, a SANYO Full HD camera monitors the endeavours of the drivers of prestigious cars from around the world taking part in the Prescott Hill Climb.

The Prescott Hill Climb, a 1127 yard course rising over 200ft, is home to the esteemed Bugatti Owners Club (BOC).  Founded in December 1929 over two pipes and a cigarette, the BOC and the Prescott Hill Climb have become synonymous with British car racing. The track, set in 65 acres, deep in the Cotswolds near Tewkesbury was purchased in 1937 by Colonel Godfrey M Giles and his brother Eric at the bequest of the Bugatti Owners Club, so that the driveway up to the estate house could be used as a hill climb racing track. To this day, the race track is in continued use, not only by Bugatti, but by many other cars, including modern day racing cars which complete the track in less than 37 seconds!

The award winning SANYO VCC-HD4000P Full HD camera which is mounted on a bridge overlooking the course, is used as a means to aid the marshals and to provide a view of the starting line for the monitoring staff and for visitors in the club house.

Ian Patton, General Manager for the BOC said “We needed to be able to monitor the track closely, and if there was an incident, see first hand the extent of what has occurred so that we can respond quickly with the correct equipment.  Historically we used only hand held radios, and the message was not always clear. The long term aim is to have the entire track covered with Full HD cameras, giving a complete picture of all the activities on the track.  This will enable the event management team to notify marshals along the track if an incident has occurred so that they can slow or stop the event straight away rather than having to wait for verification as to the severity of the incident.”

An analogue CCTV camera solution was installed over the same period of time and integrated into the network to monitor the site and in particular our paddock return road to ensure speed limits are adhered to. Due to the lack of a need for extra security, the Full HD camera has been installed purely for the safe running of the hill climb and other motor sport events.

Alastair Rayner, Specialist Communications Engineer of A J Rayner, devised the solution for the BOC, using all his technical knowledge to ensure as many features and functions of the camera were utilised as possible.  The images from the camera are transmitted to the security office, to the restaurant/bar, to a projector in the presentation room and, as it is connected over IP, there is a facility which allows for remote logging-in by the club’s General Manager from anywhere on the network.

The requirement to transmit the images from the camera to the club house only became apparent in the eleventh hour.  Alasdair utilised the latest in HDMI range extenders and an HDMI spider to connect the camera from the bridge to three flat screen monitors on display in the club house, giving crystal clear views as the Bugatti cars race up the hill climb from the starting line.  “I stretched the bounds of HDMI to relay the real time Full HD images to the club house.” said Alastair, “I then used the network of microwave links around the site to get the images onto the network so that whoever is in the control room can see what is going on.”

As the camera is connected to the network, it also allows for Alastair to remotely log in from his offices in Stourbridge so that he can check on a regular basis that it is working to the best of its ability and implement any upgrades.

Alastair’s research led him to believe that the SANYO VCC-HD4000P Full HD camera was the best solution for the job in hand but he nevertheless at the time felt he was taking a risk, albeit an educated one, in recommending what was then, a relatively new camera on the market. Alastair’s concern however proved to be totally unfounded.   Ian Patton reports that the VCC-HD4000P is capturing strikingly clear images.  “We are delighted with the camera,” said Ian.  “Apart from the superb quality of the images, the option to choose a wide angle or a narrow field of view allows us to focus on any activity and react to any incidents on the track in a decisive manner.  We are planning to add a further three cameras to the network by the end of the year, giving us and the spectators a perfect view of the whole track – in high definition.”