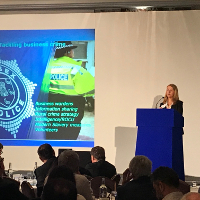 On Thursday, 28th of February, Infologue.com attended the OSPAs UK Thought Leadership Summit 2019 at the Royal Lancaster Hotel. In a Four-Part Series, summaries on each of the four speakers will be released over the next week. As with last year, the event was attended by key figures in the security industry, bringing them together with a collection of speakers drawn both from within and from outside the UK security industry.

The First Speaker Katy Bourne, Police and Crime Commissioner for Sussex (PCC), opened the programme with a talk on the “Relationship between PCCs and the business community”.

The role of Police & Crime Commissioner was introduced in 2012, following the introduction of new legislation the previous year, the concept being that PCCs, as elected individuals, can offer “the external perspective” for the people. These elected individuals help set the strategic direction and priorities for policing in their region as well as having budgetary responsibilities and holding Chief Constables to account with regards to police performance.

Katy Bourne highlighted that this is not a position that has been extended to Scotland and Northern Ireland, as these regions currently retain the old model of Police Authority. In addition, Ms Bourne stated that after 6 years in the role herself, she has come to believe that this democratic position has the potential to fundamentally reform policing for the better as it is a marked improvement over the Police Authority model particularly in the areas of transparency, accountability and dynamism.

Commenting on her ambitions for the new system, which continues to evolve, Ms Bourne said, “the key to understanding the positive impact Police & Crime Commissioners (PCCs) can have is in the name. Firstly, they ensure that provision of efficient and effective policing is delivered by the Chief Constable; secondly, PCCs are intended to have responsibility for policing by region, in its totality.”

In an additional, comment Ms Bourne said that in Sussex she was the first of the few PCCs to hold live web-broadcast monthly meetings with her Chief Constable. (These can be viewed here)

Describing the continued development of possibilities for this new policing framework, she described her involvement in the funding of 13 Community Safety Partnerships across the county. These are voluntary and community sector groups made up of councillors, police, health, education and others with the aim of implementing social crime prevention strategies. “Every week I talk to residents in Sussex … and all I hear is we need to put bobbies back on the beet. Only this month was I able to commit funds to Sussex’s current recruitment drive, the biggest recruitment drive for a few years”.

However, at this point she stressed the need to realise the significance of technologically driven crime and its far-reaching impact, more importantly, how does the force police the “digital beat” as well as the “physical beat” and by what methods?

She explained that “In our rush to digitise everything for convenience and profit, we have opened a Pandora’s Box. Our personal data has become a tradeable commodity and a complete target for criminals through our careless interaction on social media. In the Physical world, we have nation states, rules of law and responsibility, able to develop legislation over time but the digital world is an amorphous and almost ungovernable space. Some authoritarian states are trying to wrest back control; as in the case of the Kremlin, seeking to uncouple Russian servers from the Global internet.” (For more information please click here)

She indicates that the question then rests on whether “we actually need more fully trained visible police officers patrolling neighbourhoods or do we really need more digitally competent people with an appropriate level of knowledge to up our game against cybercriminals… As Abraham Harold Maslow said, ‘if the only tool you have is a hammer, you tend to see every problem as a nail.’”

It is important to note that:

– UK Businesses lose £9Bn each year to the costs of crime.

– The Home Office Commercial Victimisation Survey 2017 found that the costs of crime to the wholesale and retail sector from Shoplifting (24% of businesses) and Assaults (10% of businesses) was on average £500 per shop. Having increased from £237 in the 2012.

– The 2017 Survey online crime grew against all other criminal enterprise.

In a bid to illuminate how to counteract the exponential increasing prevalence of cyber-crime against businesses, Katy Bourne outlined what Sussex police, particularly, have done to counteract these trends. With similar models found in other areas too:

– Provide specific training to businesses, in the day and night-time economies

– Specialised Cybercrime team who collaborate with the Chambers of Commerce, Federation of Small Businesses and local business forums on basic prevention strategies

– GDPR compliant information sharing agreement with day and night-time economies, enabling a two-way flow that can assist business, and police who can identify individuals who cause the most problems on a local level

– On a National Level, information can be shared on Organised Crime and Repeat Crimes in the interest of preventing business crime, in retail, telecoms and sectors. Through the Non-Profit Organisation – The National Business Crime Solution – (For more information please click here)

– Sussex Police use the established DISC Platform, which includes over 200 Partnerships to enable GDPR Compliant information sharing between business and police: Ms Bourne argued Police intelligence sharing platforms, are a useful solution for intelligence gathering on a local and national level. For instance, helping Door Supervisors on a local level to identify predators and troublemakers among nightlife socialisers.

The role of PCCs are perhaps a welcome reform to the British Policing System when looking at questions of transparency, accountability and operating with the consent of the people. However, PCCs are responsible for shouldering the difficulties of continuing the policy of under-resourcing police in this period of public sector austerity. PCCs are tasked with alleviating the shortfall in policing presence, by means of finding dynamic solutions. With a tight purse, the police are looking to “smart” alternative solutions to new digital threats and existing responsibilities; technological investment being a key focus for developing the Police’s capabilities. The new Police Grant Settlement highlights this trend, as PCCs are being given the option to raise additional funds locally from council tax to support prospective developments.