Engineers at the University of Leicester have for the first time created a way of measuring how much force is used during a stabbing using a broken bottle. The advance is expected to have significant implications for legal forensics.

A team from the University has conducted a systematic study of the force applied during a stabbing and come up with the first set of penetration force data for broken glass bottles. This work has been published in the International Journal of Legal Medicine.

Stabbing is the most common method of committing murder in the UK. Injuries and assaults related to alcohol consumption are also a growing concern in many countries. In such cases the impulsive use of weapons such as a glass bottle is not uncommon.

In approximately 10% of all assaults resulting in treatment in the United Kingdom (UK) emergency units, glasses and bottles are used as weapons. Official UK estimates suggest that a form of glass is used as a weapon in between 3,400 and 5,400 offences per year. There is little understanding of how much force is required to create the injuries as, until now, there have been no systematic studies of how much force is required to penetrate skin with such weapons. 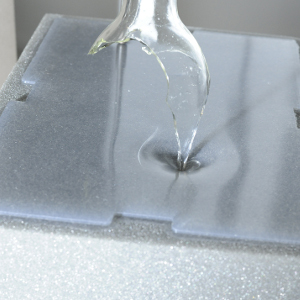 The study has also revealed that carrying out reconstructions of glass bottle stabbing incidents can be unreliable and may lead to a misleading approximation of force involved as glasses and bottles fracture to leave a unique stabbing surface of sharp and blunt points. This could have major implications for not only those in the field of forensics but also for anyone involved in a stabbing incident.

The study carried out by Gary Nolan, a PhD student working with the East Midlands Forensic Pathology Unit and Department of Engineering, at the University of Leicester, is the first of its kind in measuring the force required for penetration with broken glass bottles. By examining the impressions of shattered glass on a skin simulant consisting of foam with a layer of silicon rubber, researchers have managed to provide a basic classification for the presenting end of a glass bottle.

Mr Nolan said: “It is common knowledge that broken glass bottles can be used as an effective stabbing weapon and the results of the study have reaffirmed this.

“Following such incidents the forensic pathologist is often faced with the difficult task of offering an approximation of the degree of force involved. Currently there is very little work considering how much force is involved in a stabbing incident involving a broken glass bottle. This is alarming from the point of view of victims of such incidents as such information could influence the outcome of a court case.

“Our study provides the first set of penetration force data for broken glass bottles and illustrates how the consideration of proffering an opinion on force used is different to that of knives.”

The study has found that the smashing of bottles to give a stabbing instrument produces a unique ‘stabbing surface’ for each bottle, which means it is not possible to predict a definitive value for the amount of force involved to cause a penetrating injury in a broken bottle attack.

Mr Nolan added: “Although some bottles have similar penetration forces to knives, due to the presenting broken glass geometry, most require a much larger amount of force which suggest that the majority of stabbing incidents involving bottles would require greater force than those involving knives.

“I’m very excited about this piece of work as it has great implications within the field of forensics and to society as a whole. This study provides information for forensic practitioners which could ultimately lead to a change in the way that stabbing incidents with broken glass bottles are dealt with in court.”

Professor Sarah Hainsworth, Professor in Materials Engineering at the University of Leicester, said: “Gary’s research has allowed us to get a better quantitative understanding of the level of force required for puncturing skin with glass. It has also allowed us to better understand how the geometry of the individual fracture surface plays a significant role in affecting that force. As far as we know, this is the first time that tests have been able to quantify the forces in this way.

“We are now working with the Materials Knowledge Transfer Network and the Institute of Materials, Minerals and Mining to take the insights from the research into standards for safer pint glasses and are looking at how we can work with the glass industry to develop new approaches to design of glasses that fracture to create less damaging surfaces.”

Mr Nolan’s studentship is provided by the East Midlands Forensic Pathology Unit, which is at the University of Leicester, lead by Professor Guy Rutty (gnr3@le.ac.uk).