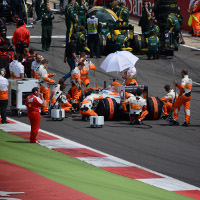 ACTViquestPRO, the integrated video and facility management IP platform from ACT, has been used as a safety and race directing system at Silverstone for the 2014 Formula 1 Santander British Grand Prix which was won by home driver Lewis Hamilton in his Mercedes.

The ACTviquest software provided footage from 32 cameras around the 3.66-mile circuit as well as acting as a GUI to empower the decision-making of race controllers. The controllers received instant assess to data from course marshals in relation to potential hazards, traffic in pit lanes and general race conditions.

An advantage of ACTViquestPRO and the twin offering of ACTViquestWALL is that organisers at large events who must aggregate information from multiple video feeds, digital signage, histograms and other disparate data sources, can do so from a single display wall. In this way, abnormal conditions that may have an impact on the safe running of a motor event can be pinpointed immediately.

The variety of video used at Silverstone is illustrated by the fact that certain channels gave views of pit lanes and were fed into the F1 constructor teams to give them awareness of likely congestion while other views showed mechanics their own cars’ progress out on the track.

The cameras, which are HD P/T/Z units by Sony, were labelled according to some of the totemic landmarks on the Silverstone track such as Club Corner, Hangar Straight (the longest straight at 770 metres with an average speed of 145 mph) and Maggotts Curve, which exerts a lateral G force of 4.5G on the drivers.

Shay Moran, Chairman of ACT, said: “ACTviquest underpins our commitment to scalable integration of video management and data aggregation at the widest range of venues. We pride ourselves on helping clients to manage an ever-increasing range of data types and security or safety risks. The Santander British Grand Prix saw £44m being spent at the course and in the county of Northamptonshire.”

ACTviquest is designed for all levels of safety and security risk and can be scaled according to the size of the application. The video management can also be paired with scene analytics that will alert the user to significant behaviour that is atypical and warrants investigation.

In addition to the Sony units used at this application, ACTviquest supports all major camera brands including Ganz, PixelPro, Vivotek, Hikvision, Bosch and Samsung.