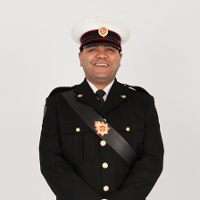 Corps Security, the leading provider of specialist security solutions, is celebrating after one of its officers was named as a winner in the British Security Industry Association’s (BSIA) Regional Security Personnel Awards 2015. 35-year-old Clarence Hyman emerged victorious as Best Newcomer in the London regional heat and is now in contention for the national award, which will be presented at the BSIA’s Annual Lunch on 15th July.

Since joining Corps Security in 2013 Clarence has made an overwhelmingly positive impression amongst colleagues and customers alike. He was nominated for the Best Newcomer award due to his ability to consistently deliver an outstanding level of customer service and raise the performance of others in the teams he works alongside. Always willing to share his knowledge, he provides voluntary mentoring for new recruits or younger members of the organisation, in order to make them feel welcome and to ensure that they conduct their duties in the correct manner.

Commenting on his award, Clarence said, ‘I’m delighted to have been presented with this prestigious accolade and to have my work for Corps Security recognised in this way. Since joining the company I have been encouraged to learn as much as I can about the security industry. The first-class training and skills development that I have been given has provided me with the impetus to go as far as I possibly can in my chosen career.’

Due to his ‘can-do’ attitude, many of Corps Security’s customers have requested that Clarence remains on their sites as a part of a permanent team. They have all remarked upon his approachable personality and ability to perform his role in a way that personifies the Corps Security ethos.

‘It is hard to believe that someone who is as new to the industry as Clarence is able to perform his duties with such professionalism, skill and dedication,’ commented Peter Webster, Corps Security’s Chief Executive. ‘We are incredibly proud of him for winning the hotly contested BSIA Regional Security Personnel Award for Best Newcomer and wish him all the best for the national competition.’