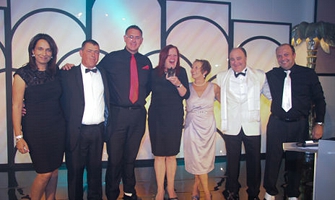 A team of 30 Mitie employees has been recognised for helping ensure a factory remained operational by beating back torrential flood waters.

The team, which consists of people working from across security, cleaning, waste and engineering maintenance, ensured that the site remained fully operational just 12 hours after it was hit by flooding last year.

To recognise their achievements, the team, who are located just outside of Nottingham, was awarded the first prize of £15,000 and the Mitie Stars trophy.

Mitie Stars recognises teams and individuals that go above and beyond for clients and/or colleagues and consistently deliver exceptional, inspirational service.

Despite working through the night, the entire team returned to work the next day for normal duties in a display of modesty and humility that captured what it is to be a winner of Stars.

This year saw over 2,400 nominations from all across Mitie, which was whittled down to 10 finalists who attended a special Mitie Stars finale event last week with the winning team being presented their award by Mitie’s CEO.

Three individuals were also awarded commendations, plus a £2,500 prize, for examples of outstanding commitment, dedication and teamwork in other parts of the business.

“Choosing this year’s overall winner was incredibly difficult and so many of the nominations displayed really inspiring examples of commitment, strength and determination.

“This process never fails to inspire me and I am delighted that this exemplary team has been rewarded and recognised.

“Their story is what Mitie is all about – passionate people doing a fantastic job. I am very proud of everyone involved for delivering above and beyond when faced with such challenging situations.”