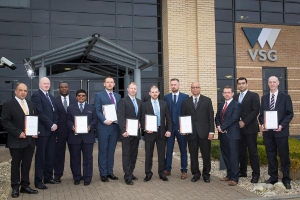 The BSIA’s Security Personnel Awards serve to reward security officers for their dedication, loyalty, teamwork, customer service skills, use of technology and bravery. Currently in their seventh year, the awards are presented both regionally and nationally in five categories: Service to the Customer, Outstanding Act, Best Use of Technology, Best Team and Best Newcomer.

VSG’s talented people were recognised with five regional awards with all winners now being put forward to the national round of the competition. Three VSG teams were successful in the Best Team category with two more colleagues also receiving recognition in the Best Use of Technology and Service to the Customer categories.

These awards come hot on the heels of an already successful few months for VSG, having recently achieved certification as a ‘Top Employer UK 2015’ earlier this year. This is the fourth year running that VSG has been recognised by the Top Employers Institute for offering its colleagues an outstanding working environment.

Barry Dawson, Business Director for VSG said: “We are delighted to have won so many of the regional British Security Industry Association Awards. These awards are very highly regarded within the security industry and showcase the talent we have here at VSG. We’re extremely proud of the outstanding work our officers and teams do in the course of their day to day duties and it’s great to see these first-class performances recognised in this way.”