Following the 2016 Big Interviews with Liz France, Chair of the Security Industry Authority (SIA) Board, Alan Clamp, CEO of the Security Industry Authority and Peter Webster, CEO of Corps Security, we chose to meet with Carl Palmer, Executive Chairman at CIS Security, write Infologue.com’s publisher Bobby Logue and News Desk, Ryan Gordon. Carl, who formerly held the position of Managing Director at CIS for over 14 years, has been in his current role since January 2013.

As we entered the CIS Security headquarters to interview Carl, we met an energetic and modern environment. I was advised that their offices would soon be undergoing refurbishment. We began the interview by asking Carl about his background within the company.

We had eight people…
“My father started the business in 1969 and I joined after six or seven years. My previous career was in fire engineering. I didn’t originally have any aspirations to join my father’s family business, but I did. At the time, there were eight people employed at the company. We had our first guarding contract with three security officers and three individual sites, working a 52 hour week. I always enjoyed the fact that that when we had about 600 staff, I knew them all personally. We now have 1600 members of staff and I must admit it takes me a bit longer to recollect names now we have a much bigger workforce.

“The guarding profession is evolving fast. Nowadays we have a smarter, more accessible, front-of-house approach, while still maintaining the security function. The culture goes right through the company. When people turn up to receptions, our colleagues are usually the first people they meet, so it’s really important that we leave them with a positive experience”.

Recruitment is not something we have an issue with…
Carl explained that CIS do not have issues recruiting staff. “I see and hear people saying that recruitment is a problem and they are unable to get the right calibre of applicant. We get people who want to work with us because of our reputation. Our most important asset is our people. Without them we wouldn’t have a company. We all try and treat each other with the same respect.

We have one of the lowest staff turnover rates in the business and I believe this it is because we look after our people. We are recognised partners working with the Living Wage Foundation.

“You have to cater to everyone. In our offices you will see a noticeboard, which is all part of our engagement with the staff. We are going through a big refurbishment here and we are seeking staff ideas and feedback to our plans as part of that. It would be easy for me to do it with the architect but we want to engage everyone. If anyone has an idea, or has seen something they like, they can put pictures up. Things like that are very meaningful”.

“In our office yesterday we had a security officer with PIN number 003. This colleague has been with us for 35 years. How many companies can say that? We have a lot of staff that have been with us for a long time. All colleagues get an award at ten, fifteen and twenty years. I sign the certificate provided to them and they all get a photograph and a newsletter appearance. We treat it as a celebration. I find it rewarding to go around and see colleagues that have been with me for twenty years and longer. The same is true with our client base. We have a very high retention rate with our clients. Part of our ethos is about building a relationship with our clients by working together and moving forward. We always aim to enhance the service that we deliver to them.

“Out on site we’ve got great engagement. A great idea here at CIS, was the “Blow Your Own Trumpet” initiative. This gets colleagues telling us what they’re doing, not just at work but at home. Things like a cycle ride to raise money or if they have qualified for a championship in dancing or football, whatever their passion is, we aim to bring out their personalities. All of that is then collated and added to the newsletter. We also have other initiatives, like Officer of the Month and a grand Annual Awards Ceremony.

“We have external awards which we’ve been very successful at over the last 12 months. In addition to this, we have our own internal awards. These for me, are of much greater importance. This is because we’re judging it and we know what they’re doing. At one of our sites, our client has recommended that our security officer attends the Queen’s Royal Garden Party. He was overjoyed. That gives you an idea of the level of engagement we are trying to have with our clients and our staff.”

We developed a talent pool…
Carl went on to talk proudly about career progression within CIS. “We have got so many good Managers within the company. We got to that situation because we developed a talent pool. We earmarked different people who we thought potentially, in the future, would be good Managers. We did this so that we could identify people and then refer to our talent pool list when we had a vacancy. We would then be able to say, “Who’s next in line for succession?” “Would they be suitable for that role?”. We’ve developed our own Managers at CIS. We want to be different, and do it differently, from the rest. That hasn’t happened overnight. I’ve been here 35 years and it’s taken me that time to get the ethos that I wanted in this company. We’ve now achieved that”. 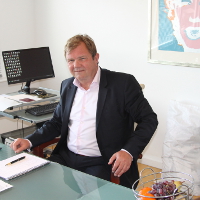 “When Brexit happened we sat down as a team and questioned what the decision meant for us. We reviewed our workforce to determine how many colleagues may be affected by the changes to EU law. Overall it was very few people”.

Infologue.com recently released an article on Infologue.com which provides the breakdown of the security industry immigration labour statistics.

As a concept itself, I really like it…
We quizzed Carl as to his view on the Approved Contractor Scheme (ACS) in its current state. “When I heard about the Approved Contractor Scheme, I was of the understanding that there would only be about 20 companies. I was under the impression that it was going to be a very hard thing to get. As a concept itself, I really like the ACS and as a whole, I thought it was an excellent thing to have. What’s not excellent, however, is having 830 companies with the same accreditation. To me, that does not make sense.

“I think the answer to solving issues with ACS is to make entry more selective and difficult. I believe the ACS in itself is a good tool. For me, I appreciate knowing what areas we have to work on. My only criticism of ACS is that is seems to apply to everyone. We can turn it on its head and look at it a different way. All our competitors have similar ACS scores, so why would a potential client pick CIS over a competitor?  We, as individual companies, have to do our own thing and ensure we stand out against our competitors.

“I think being able to publish an ACS league table would help. I know you have one on your website Bobby but the ACS website needs this too. I’m of the belief that just having ACS approved companies is a blanket approach”.

Part Two of the Carl Palmer Infologue.com Big Interview, which will be published tomorrow on Infologue.com, will examine CIS’ communication objectives, their senior management team and the differences CIS have found between clients.