As I arrived at Corps Security Headquarters in London to interview its Chief Executive, Peter Webster, I encountered a positive atmosphere around the building with people going about their business happily, in a modern environment. I was ushered into the boardroom, and was confronted with memoirs dating back to 1859 with The Original 8 Security Officers. I started the interview by asking Peter Webster about this apparent contradiction.

“When I came to the company 5 years ago, I spent time trying to identify what it was that made Corps Security relevant in the second decade of the 21st Century”, said Peter. “Was it in fact a Victorian company, trapped in Victorian values?”

“It became really apparent to me that, from 1859 to the present today, the thing that runs through our DNA, is our people. We’ve been around since 1859 and, on the 13th of February we were 157 years old. We took it very seriously. The Corps of Commissionaires was founded for the benefit of the members and today we still have the same view, because our ‘circle of care’ means that, if we look after our people, they will look after the customer.” 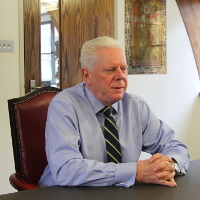 It’s about the people….
Peter proceeded to give more insight into the history of the Corps Security workforce. “Today, we don’t have ‘members’, we have ‘colleagues’, but we still have a passion for making sure that we treat these same ‘colleagues’ well. Our company has gone through many ups and downs throughout the years, including losing half of its officers in 1914 when 2,145 of its officers re-enlisted for the First World War.”

Peter explained that the introduction of The Transfer of Undertakings (Protection of Employment) Regulations meant that Corps Security could no longer be purely an employer of ex-service people. Yet Peter highlighted the close links that Corps Security still has with the military. “It is still important to us, and we still recognise those qualities and support military charities. Whilst nearly all of our profits are ploughed back into the business, we do put money back into military charities during the course of the year.”

Corps Security is owned by a trust and the trustees have never required that a dividend is paid. Indeed they never want any money. Peter continued: “Their primary interest is ‘are we looking after our people?’, ‘are we employing a high proportion of ex-service people?’ – 56 per cent of our colleagues are ex-service people – and ‘are we looking after their heritage and reputation?’” Those are the demands of my shareholders. It’s great. There are very few businesses whose CEOs have shareholders that make such demands – but I’m really fortunate and I take those requirements from my shareholders very, very seriously. Hence our view about wanting to be the ‘employer of choice’ in the industry.

The Corps is built on a solid financial platform…
Peter went on to talk proudly about the Corps Security finances. “Financially we are very secure, and asset strong. We therefore took the view three or four years ago that what we were going to do, for a number of years, was to invest in establishing the company as a leader within our industry. We decided that we were going to spend several years with an investment program in many different areas: from training, to IT, to resources, to the way we employ people and the number of people we employ. We made a conscious decision to re-invest that money for several years. I think you’ll see in the forthcoming year we’ll be back in profitability and we’ll remain in profitability.”

The growth of the business is exceptional…
“Corps Security has been very successful recently. In the last two years we have grown the contract base of our company by 65% and, in the last year, our contract base has increased by 30%. We have succeeded in growing very well. At this moment in time, our contract base is over £65 million. I think before the end of 2016 we’ll be at £70 million.”

“We are growing greater than our need, and expectation. In fact, in the last 12 months we’ve grown at twice the rate that we had intended to. We are in a fortunate position where we are succeeding, and that’s good. However we’re not a hungry animal, as we don’t have voracious shareholders to answer to and, in fact, we don’t want to be a multi-billion pound organisation wrapped in red tape, anyway.”

We are an empowered organisation with a paternalistic culture…
“At the moment we have a great culture, a paternalistic culture. We have empowered management throughout the organisation. There is a lot of care, and we talk about being a Corps Security ‘family’, which makes for a really enjoyable place to work. Part of that is because we’re a medium-sized company that thinks like a small company. What I don’t want to be is a medium-sized company which has to have the processes and controls in place that makes us a corporate company. We’ve got no pressure to be bigger than we want to be, as long as we can make a profit – then that’s all that matters.”

“We set ourselves out to be different to most of our competitors and it seems to be something that customers want to buy. From that point of view, it’s worked well for us. Our whole approach is centred on our people. The colleagues in our organisation are our prized asset. I think customers are interested in making sure that the people who serve on their premises are well looked after by the company that’s providing the service. Its the kind of message that’s working in the marketplace. The whole thing around the National Living Wage (NLW), while it doesn’t apply so much in the south of England, as one travels north, it becomes more of an issue. I think that is only helping our industry as long as we approach it with the right attitude.” 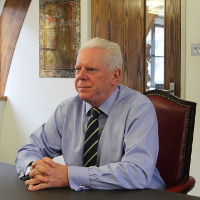 Providing security not people….
“We like to think we’re suppliers of a service, not people. What we are doing is selling our expertise and our service”, commented Peter. We are proud to be a specialist provider of security services, and our customers appreciate the expertise, experience and skills that this specialisation brings.”

Investing in our People…
Peter believes that investment in training, communication and personal growth has paid dividends. “We do an annual survey called ‘Your View Matters’. It’s very important to us. When we first started it four years ago, training was identified by our colleagues as one area where we could improve. Since then we have improved every year, and the results from our colleagues about what they think of the training shows it. That was one of our conscious decisions four years ago – to say we need to put more money into the business, and we need to put more money into training.”

“We invested heavily in online training modules for all our colleagues, which are designed to improve their security skills. This training ranges from counter-terrorism, to key basics such as report writing, telephone skills or customer care skills. We have modules that our officers can access and complete from their site. Each module is around 30 minutes, with a small series of questions at the end. We track that back into the training matrix so that we know exactly who’s done what, and when. I believe this has given people a lot of access to developmental training.”

“We add onto that all the training we do on site, which is delivered by a dedicated department, and specialists within the organisation. We do the right training onsite, whether it is first aid or other disciplines, which is vital training to perform their job. We’ve developed our online training system to give people additional skills and to make them feel more worthwhile in their role.”

“Finally, this training is underpinned with a programme which won the Security Excellence Inspiration in HR Award. The programme, known as ‘Securing Success’, is for those who are leaders onsite, and leaders beyond site. They go through a six-module process that is run annually. There are new intakes every year as we grow and change. The programme is delivered by subject matter experts from within the company on a whole range of topics. That has proven to be very important in improving and developing the skills of our operational management.” 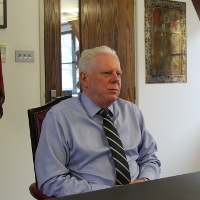 On Equality and Diversity…..
“Equality and diversity are now becoming some of the biggest issues in the industry. I think we have, from an ethnic diversity point of view, a strong representation and that has to be a good thing. The one area where I don’t think we have true diversity as yet, is the split between male and female. We are 12% female, which is probably a little bit more than the industry average, if I remember the figures from licensing correctly. However, it is nowhere near enough. I do understand that there are some roles which are not always suited to females, however I think most are. But I believe we are poor at attracting females to our industry as a whole. We are poor at attracting them to our roles, and we are poor at selecting them. As an industry we could do a lot more to address this imbalance.”

On Corps Security’s resignation from the British Security Industry Association (BSIA)….
“We resigned from the BSIA because our company does not believe that it is fit for purpose. We did not take this decision lightly. We have a large senior management team of ten individuals, who effectively run the company. We sat down, deliberated and asked the question: “does anybody have a reason why we should remain in the BSIA?. Nobody could come up with a reason. We waited a month and said, okay, in the next monthly meeting let’s ask the same question again, we’ve all got a month to think about it. Nobody – not one person – could come up with a reason why we should be in the BSIA. I then put it to my board of non-executive directors and they felt the same way.”

In Part Two of the Peter Webster Infologue.com Big Interview, which will be published tomorrow on Infologue.com, will examine Peter’s views on the state of the industry, the British Security Industry Association (BSIA), business licensing and the Approved Contractor Scheme (ACS).