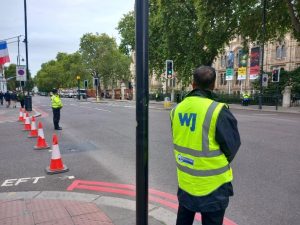 On 19th September 2022, Wilson James, played an integral role at the state funeral of HM Queen Elizabeth ll. Watched by millions of people all over the world and with thousands of people from across the country lining the streets of London to pay their final respects, the event was a fitting farewell to the longest reigning British monarch, who died at the age of 96.

Behind all the pomp and ceremony was a carefully orchestrated and executed security operation that had been planned and refined over many years. One of the largest ventures of its kind ever in London, over 12,000 private security professionals and stewards supported police officers and military personnel throughout the day in order to keep the royal family, mourners and the public safe and the event free from any disruption. 192 Wilson James colleagues volunteered their services including 19 senior management team members.

The Wilson James team was deployed along the procession across Kensington. The day started with a briefing at 5.00am and personnel were sent to designated areas, with teams in position from 7.00am until demobilisation at 4.00pm. A dedicated operational command centre was set up at Brompton Oratory and a secondary break area at the Royal College of Arts provided facilities for rest, staff welfare and additional command and control. 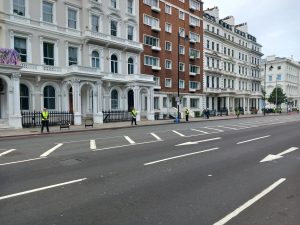 The planning on the day was meticulous; officers and supervisors were comprehensively briefed and an extensive deployment plan ensured that the event ran smoothly. Grouping prepopulated teams into dedicated locations also gave personnel smaller areas of responsibility and, combined with the command structure on the day, facilitated simple but effective operational management. Personnel registered and were issued with their kit in order to expedite deployment and make sure all roles and responsibilities were understood.

‘Those watching the state funeral of HM Queen Elizabeth ll would have had little idea of the size and scale of the security operation behind it – that’s how it should be, as it indicates just how well it was carried out,’ commented Gary Sullivan OBE, chairman at Wilson James. ‘The consensus was that it was a very successful team operation. All Wilson James colleagues performed exceptionally during a long day with an early start, but everyone gave the kind of professional and considered service that was needed for this once in a lifetime event. It was a tremendous honour and privilege to be part of an occasion that marked the end of the second Elizabethan era.’

The British Security Industry Association (BSIA) has announced the full list of natio...
Read More
Subscribe to our newsletter