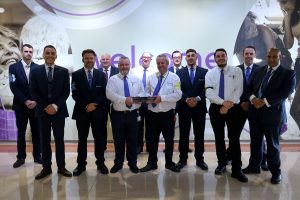 Every year, the Sceptre awards recognise exceptional companies and individuals who distinguish themselves through their work in the shopping centre industry.

Chosen from thousands of nominations, Axis Security’s team working out of Romford’s Mercury Shopping centre were awarded ‘Security Team of the Year’ at 2019’s ceremony.

Spencer Hawken, Centre Manager, attributes the safe and welcoming environment at his centre to the Axis team, particularly with regards to their elderly and teen-aged guests.

Hawken says, “The Mercury security team is a welcoming presence in Romford,”  adding that “As knife crime moves East from London into our quiet suburb, we need to be vigilantly creating a safe environment. Thanks to our team’s dedication, we have been able to avoid the problems suffered by neighbouring areas.”

The centre manager goes on to say that, “In addition to traditional security duties, the team takes an active role in our community. Officers have helped to set up and run a quarterly gaming league for teenagers, giving the officers an opportunity to show that they are approachable, that they are a friend, and not a threat to this vulnerable demographic.”

These commendations are reflected in the numbers as crime statistics from the centre show a marked improvement. Anti-social incidents are down 19% and assaults are down 47% on centre grounds for the period of 2018 – 2019.

Additionally, the team has been fully trained in autism awareness and how to handle dementia sufferers leading to the site receiving an autism friendly award last year.

Axis Security Managing Director, David Mundell, congratulated the team saying that, “We have a highly professional and approachable team who are delighted to see their hard work recognised and held up as the best in the shopping centre industry. Their ongoing contribution to the community and approach to zero tolerance on anti-social behaviour is making a real difference to the people who visit and work in the shopping centre.”

Bidvest Noonan has appointed Simon Giles as Chief Finance Officer for its business in Great Britain. The appointment stren...
Read More
Subscribe to our newsletter