“In my first article for Infologue I described how the security planning for the 2012 Games sat within the UK’s Counter Terrorist Strategy, CONTEST, and how industry was recognised as an essential partner in that strategy. In my second article I explained how implementation of CONTEST was being undertaken by Government and encouraged in the private sector, and also explained how this translated into the Olympic arena. In the third article I concentrated on the demands of the IOC and the impact of the Olympic & Paralympic Safety & Security Strategic Risk Assessment (OSSSRA).  In this fourth article I move onto the Olympic & Paralympic Safety & Security Strategy (OPSSS).

“The initial reaction to security planning following the award of the Olympics to London 6 July 2005 was through leadership from the Metropolitan Police Service (MPS)who set up a team dedicated to planning for 2012, and this team was pre-eminent in ensuring that planning would be multi-agency and that design principles would encompass ACPO Secured by Design principles.  They did this by embedding police expertise at an early stage into the Olympic Delivery Authority who have responsibility for the design and building of the Olympic park and venues. This was real foresight from the MPS and ODA and the consequence in 2010 was that the ODA was awarded the ACPO Secured by Design Accolade for the design of the Olympic Park and the Olympic Canoeing venue at Broxbourne.  Assistant Commissioner Chris Allison, National Olympic Security Coordinator and MPS lead for safety and security for the Games, said: “The application of Secured by Design principles at the start of venue design and construction has significantly helped to enhance safety and security at the Olympic Park and other venues and is much more cost effective than attempting to add on measures at a later stage. This is just one way in which police have been working closely with the ODA and LOCOG to make sure that safety and security is built in to every stage of Olympic planning.”

“In late 2008 responsibility for the Olympic Safety and Security Strategy moved within the Home Office to the Office for Security and Counter Terrorism. Its team the Olympic Safety & Security Directorate (OSD) took ownership of planning for the Games and following the publication of the OSSSRA the OPSSS was developed and published in July 2009. It has also received support by a number of CONTEST related publications and strategies e.g. the Science & Technology Strategy and Social and Behavioural Science Strategy.  The Home Office has been keen to share all these strategies with the public and non-classified versions are available on the Home Office website.  The latest versions of the OSSSRA and OPSSS have are also now available.

“The OPSSS follows a standard pattern of Vision, Objectives, Governance, Risk, Planning Principles, Assumptions and Success Criteria but fundamental to its application is its Programme structure. 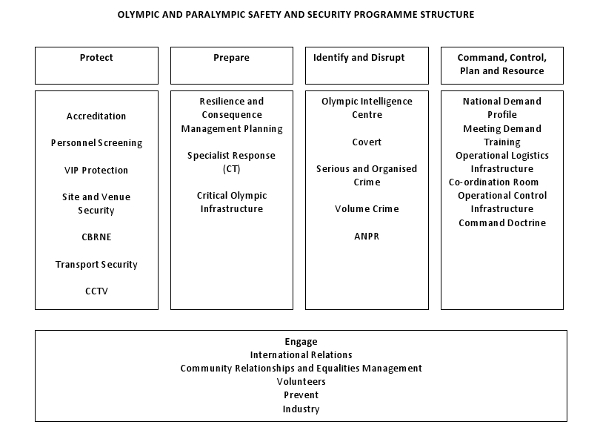 “This structure is made up of 5 programmes, 3 of which mirror CONTEST namely Protect, Prepare and Identify and Disrupt (Pursue). The fourth CONTEST programme, Prevent, has an Olympic element and this is to be found in the Engage Programme. Each of the Programmes contains relevant Projects and the 27 Projects combine all elements of all the partners involved in delivering a safe and secure Games. The structure and strategy have been devised to ensure real ‘joined-up’ planning and operation to a single plan at Games time.

Each of the Programmes has a strategic objective linked to operational outcomes and these are:

Protect – Protect Olympic and Paralympic venues, events and supporting transport infrastructure and those attending and using them.

Prepare – Prepare for events that may significantly disrupt the safety and security of the Games and ensure capabilities are in place to mitigate their impact.

Engage – Engage with international and domestic partners and communities to enhance our security and ensure the success of our Strategy.

“Each of the projects within the OPSSS has its own supporting strategy of work required to deliver the operational outcome. The fundamental plan is the Concept of Operations (CONOPS) which is a ‘living’ document which guides all the operational planning.  Sitting within the OSD are a Design team and an Assurance team who ensure that all plans knit together; and this includes the MPS’s own operational plans for the day-to-day policing of London.

“The breadth of the planning for 2012 reflects the risk to the Games from terrorism and the mitigation, which is necessary to address that threat, has to balance the objective of a safe and secure Games with the understanding that the Games are a sporting event, not a security event. Nonetheless the Games will be the biggest security requirement faced by Britain since the Second World War and for the private sector possibly the biggest requirement ever seen. The depth of planning will not only resonate in the delivery of security at Games time but will have a long-lasting legacy on the way Government agencies work together but in the way the private sector is acknowledged as a trusted partner.

“In my next article I will look at the work of the Olympic Delivery Authority and the London Organising Committee for the Olympic and Paralympic Games.”