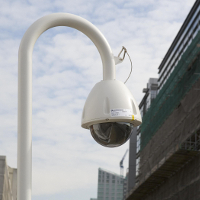 Currently serving as Vice President – Head of Physical Security Intelligence at Barclays Bank, Mr. Porter previously served in the police for 20 years, where he rose to the rank of Assistant Chief Constable within the Greater Manchester Police force, while serving as Deputy Senior National Coordinator for counter terrorism until October 2012.

As the trade body representing the UK’s private security industry, the BSIA – and particularly its CCTV section – has worked closely with the Surveillance Camera Commissioner’s Office over recent years, focusing on the development of the Protection of Freedoms Act 2012 and the Government’s subsequently-released CCTV Code of Practice, which was issued last year.

Alex Carmichael, Technical Director at the BSIA, comments: “Throughout his term in office, Andrew Rennison has provided excellent leadership and the successful production of the CCTV Code of Practice that will improve the quality of public space CCTV. systemsThe CCTV Code of Practice will ensure that the use of Public Space CCTV systems meet a pressing need, are proportionate, effective and meet relevant legal obligations . I have worked with Andrew since he took over the role of surveillance camera commissioner and his dedication and drive to improve the quality, transparency and legality of Public Space CCTV Systems will be of real benefit to the public and public space operators alike. To this end, I would like to thank Andrew for his leadership, and wish him well in his onward career.

“There is, however, still a lot of work to be done to produce the necessary standards framework to support the Code of Practice. As such, the BSIA is very much looking forward to supporting the new Surveillance Camera Commissioner in meeting his aims and objectives as we continue to raise quality and standards in the public space CCTV arena.”

Speaking in a Home Office statement, the Minister of State for Crime Prevention, Norman Baker, commented: “I should like to record the government’s appreciation of Mr Rennison’s contribution in laying the foundations for regulation of surveillance camera systems.”

Commenting on the new appointment, Andrew Rennison writes: “I have enjoyed working with Alex Carmichael and others at the BSIA who have given me tremendous help and advice. There is still a good deal to do, I have no doubt that Tony Porter will receive the same excellent support from the BSIA that I have.”

Mr.Rennison will continue to fulfil the role of Forensic Science Regulator on a part-time basis until a new appointment is made.