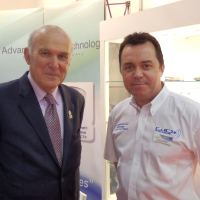 Members of the British Security Industry Association’s Export Council, who exhibited at the recent Intersec 2013 exhibition in Dubai, are reporting a high level of visitor interest in the wide range of innovative UK security solutions, from integrated systems to access control, CCTV, control room consoles, perimeter protection, intruder alarm and power supply technology, on display during this year’s show.
The positive experience of member companies at Intersec 2014 was underlined by the positive feedback from those questioned at the event, with nearly 67% reporting an upturn in visitor numbers and, crucially, none reporting a fall compared to last year. Members were also quick to emphasise that the quality of attendees had also improved since the previous year.

The scale of the British presence at Intersec 2014 was certainly impressive this year with the BSIA-organised UK Pavilion 40% bigger, resulting in the highest ever turnout of UK companies at the event. The strength of the UK security sector was also underlined by a high level ministerial visit. The Secretary of State for Business, Innovation and Skills, the Rt Hon Dr Vince Cable MP, spoke to representatives from the BSIA and member companies, including Greg Stuttle, Chairman of the BSIA’s Export Council, as he toured the UK Pavilion on the opening morning of the show.

Leading up to Intersec 2014 the importance of the Middle East to members of the BSIA Export Council was underlined by the results of the annual ‘State of the Nation’ survey considering global export trends. This confirmed that the region sits top of the agenda as the primary market being targeted by members for growth over the next 12 months. This was also reinforced by the region-specific survey conducted by the Export Council in the lead-up to Intersec 2014 which found that 89% of members are already active in the region and all members who responded said that they anticipate a rise in orders during 2014.

Greg Stuttle, Chairman of the Export Council at the British Security Industry Association (BSIA) is delighted with how Intersec 2014 went for member companies: “Without doubt this was the most successful Intersec yet for BSIA members after 16 years of attendance, based on the reports I have had on the level and quality of enquiries. This has served to demonstrate the strong appetite out there for British security solutions.

“It was also great to see the support of the UK Government, with the visit of the Business Secretary providing a welcome boost. Intersec is an ideal platform for our members to promote their solutions and ranks amongst the most important of the exhibitions we attend worldwide and is not just a key regional show but, crucially, an event that now attracts visitors from as far afield as Africa, India and Russia.”

Member companies showcasing products and services at Intersec 2013 were asked for their comments on the exhibition:

Mike Parry, International Sales Manager, Remsdaq, is positive about the event: “The quality of visitors has been as high as ever, if not higher than previous years. We used Intersec 2014 to highlight our latest IP based control system using BACnet and our Arabic key pad.”

Ian Moore, Managing Director at Elmdene International Limited added: “In a world of seemingly limitless power with oil and gas there is still a strong focus on efficiencies. We have the switch mode power supplies for this and that is where we saw the most demand from visitors to Intersec 2014.”

David Aindow, Product and Technology Director, Synectics, said: “We previewed our soon-to-be-launched control platform, Synergy 3, which will bring new features and benefits to our customer base. The show has been fantastic with people from a whole host of different sectors. Certainly, in the Middle East being a UK manufacturer is very attractive for customers.”

John Davies, Managing Director at TDSi comments: “The main thing for us at Intersec was the integration of our access control platform and our VMS software – VUgarde – and the new integration that we have with ASSA ABLOY’s Aperi locking technology. We also found that people are looking not just for integration between access control and CCTV but also building management systems.”

Paul Dixon, Marketing, Bold Communications, adds: “We were promoting our Gemini integrated security management platform which is Bold’s leading software product. We made some very good contacts during the show including in blue chip industries. It was very good to be part of a large UK team on the Pavilion and we had very good support from the BSIA.”

Tony Smith, Marketing Manager, Integrated Design Limited (IDL) said: “Intersec was an opportunity for us to remind everybody about the Fastlane brand and launch some new products. The feature that we were pushing was Internet connectivity. All of our turnstiles now come with an Ethernet connection so we can offer remote support and diagnostics.”

Tony Allen, Managing Director, Dycon, comments: “This time we concentrated on our communications products, which we didn’t show last year, and our power products. We had a tremendous number of visitors to our stand who were all interested and ready to do business.”

Jonathan Oseland, Assistant Manager, Winsted, said: “This year we presented the Ascend version of our Prestige console range. We have recently developed a drop down section of the console to enable improved line-of-sight for the operators to go with the motorised sections for the monitor lifts and work surface areas to reduce fatigue over the duration of an operator’s work shift.”

A video of members being interviewed at the show can be found on the BSIA’s YouTube channel at https://www.youtube.com/watch?v=CM0qtANTmMk

For more information about the work of the BSIA’s Export Council and the benefits of membership, visit www.bsia.co.uk/export-council