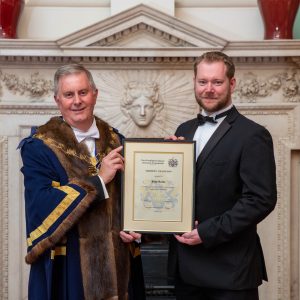 On the 7th of October 2019 at the Annual Dinner of the Worshipful Company of Security Professionals, DS Joby Reeve was awarded the ‘Principal Bravery Award’ by Sheriffs Prof Michael Mainelli and Christopher Hayward.

The Sheriffs’ Award was conceived following the 7/7 attacks in London to recognise the outstanding bravery and actions of members of the public. Each year, the Sheriffs seek nominations for individuals who have confronted danger, acted without thought for their own safety or faced adversity in an inspirational manner.

After reviewing all of the nominations, the company decided that DS Joby Reeve should be given the award for his actions on the 11th of August 2018.

DS Reeve, while off duty, was witness to a robbery committed by a moped gang. Quickly, the Detective Sergeant entered the fray, dragging one of the perpetrators from the vehicle. Attempting to detain the suspect by means of a bear hug but bother were dragged to the ground.

As the two combatants rose, the criminal drew an 8-inch blade and advanced on the off duty policeman with murderous intent. As the villain lunged, DS Reeve kicked him, causing the speeding blade to plunge into the top of his thigh. The officer stood his ground between the attackers and the intended victim, resulting in their retreat.

DS Joby Reeve refused to leave the scene, bandaging his own wounds while waiting for his colleagues to arrive despite increasing blood loss.

While off-duty, DS Reeve risked his life for a stranger and without hesitation demonstrated extraordinary courage and dedication to the defence of the public, exemplifying the virtues that the City of London Police hold dearest.

As part of the award, DS Reeve will receive £2,500 as well as having his name inscribed on a board of honour and be recorded in the Book of Honour which are on display at The Old Bailey.