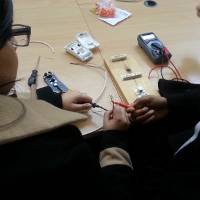 Following Skills for Security‘s schools workshops, 88% of female students were interested in finding out more about the security industry and its careers.

As part of an Equality and Diversity project with the Equality Challenge Unit (ECU) and the Skills Funding Agency (SFA), Skills for Security aimed to encourage females to consider security as a career choice and set out to tackle some of the preconceptions of an industry that is 92% male.

The project, which started in January 2015 and continued until June 2015, engaged with schools across the UK aiming to increase their knowledge of the security sector and the careers it offers.

By understanding the schools thoughts on the industry, Skills for Security has been able to develop detailed guidance material for schools and employers.

Skills for Security delivered a series of workshops with schools and students as an introduction to the security industry with practical have a go sessions and a guest speaker.

The majority of students attending the workshops reported that they hadn’t considered the security industry as a career choice as it was male dominated and there was of a fear of not ‘fitting in’.

“The workshop has given me a greater ambition of working in the industry as I have learnt there is a lot more to it than just being a bodyguard.”

The workshops and focus groups with students have enabled Skills for Security to gather valuable feedback on student opinions of the security industry and what employers could do to attract more students and what careers and training would and would not  be considered and why.

This information, along with feedback from women already working in security and from employers, allowed a toolkit to be developed to enable employers to better target recruitment campaigns with advice and guidance on procuring and retaining female staff.

The employer’s toolkit can be found online here: http://www.skillsforsecurity.org.uk//gfx/pictures/1437160578.pdf

A series of careers progression pathways for different professions in the security industry are also available for learners, teachers, career guidance and employers to understand the training and qualifications needed to progress in a job.

Through the project, Skills for Security has developed relationships with key security employers and groups such as the Women in Security Society and ASIS international and from these built a network of female mentors and inspiring case studies to motivate students, employers and employees to look at what could be available to them.

Dawn Holmes, advocates the training and opportunities available in the security industry as she progressed from warehouse supervisor to vice president of corporate security at Bank of America Merrill Lynch. http://www.skillsforsecurity.org.uk//gfx/pictures/1433848317.pdf

“The security industry is so varied and wide-ranging; there would be a facet of the industry that would appeal to many different people.”

“In a short space of time the Skills for Security team were able to address many of the misconceptions the students had about the industry and really emphasise that there are a huge array of career opportunities available and we want to continue to ensure that girls are considering jobs ranging from guarding to the development of bio-metric security systems.