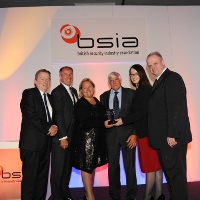 Back in 2003, Interconnective Ltd (publisher of the security and counter-terrorism focused news and opinion portal www.infologue.com) devised and sponsored the inaugural Building The Future Award.

On an annual basis, this accolade is bestowed upon the individual or organisation deemed by previous winners still active in the security world to have used the previous 12-month period in creating a major footprint – a major footprint on the road towards the realisation of a vibrant, professional and profitable security services sector for the UK.

In 2014, the winner is the British Security Industry Association’s (BSIA) membership, who ably and actively support the Trade Association that does so much to benefit the security sector by way of standards and Code of Practice development as well as political lobbying and continually helping to influence the road map for private sector regulation.

Speaking on stage at this year’s award presentation, which took place at the BSIA’s own Annual Luncheon and Security Personnel Awards Ceremony, Interconnective Ltd’s managing director Bobby Logue explained: “The key reason why the BSIA’s members have been selected to receive this year’s award is due to their invaluable contribution towards the Trade Association’s cohesive strategic direction. Members of the BSIA’s individual sections decided on their individual strategies and, at the same time, actively embraced a set of corporate goals led and championed by outgoing BSIA chairman Geoff Zeidler.”

Logue continued: “As a result of the changes introduced, as an organisation the BSIA has become far more member-centric. There is now much greater participation in the Trade Association by its smaller members. This has been evidenced this year, in fact, by the number of smaller security companies putting forward submissions for the annual Security Personnel Awards. In the late 1990s I accused the BSIA of perhaps being a ‘Big Boys’ Club’. In my opinion that’s no longer the case.”

Reasons behind the decision

Logue went on to outline several other pivotal reasons why the BSIA membership has triumphed in 2014. They include the following:

Commenting on the BSIA membership’s success, Risk UK’s Editor Brian Sims Hon FSyI – who presented this year’s trophy in tandem with Bobby Logue – explained: “The BSIA has done so much in support of the security sector and the profession of security in general. On that basis alone, this recognition is just reward for the section members who absolutely underpin the fabulous work carried out by the dedicated BSIA team at Head Office.”

Sims continued: “In the guarding world, BSIA member companies have campaigned tirelessly on regulatory issues, while at all times their members of staff perform outstanding acts of bravery and exhibit Best Practice on behalf of client organisations. Similarly, BSIA members involved with systems development have played a crucial role in helping to formulate new standards and Codes of Practice. Without their efforts, it’s fair to put forward the notion that the security sector simply wouldn’t progress.”

Back in April, for example, an important Code of Practice for the CCTV sector was revised by the BSIA in order to reflect the very latest in surveillance camera installation standards.

The Code of Practice – relating to the planning, design, installation and operation of CCTV systems – was first published in the early 1990s. With so much change currently affecting the CCTV sector, including newly-created IEC and Cenelec standards, this latest revision was undertaken to reflect current installation practices and bring together all requirements from across the standards landscape.

The landscape of CCTV standards is indeed complex and can be difficult to navigate, so this Code of Practice (alongside its associated guidance) is intended to provide a single point of information for security installers wishing to provide a quality service compliant to legislative requirements.

Previous winners of the Building The Future Award

Previous winners of the prestigious Building The Future Award – which is orchestrated by Bobby Logue and, in 2014, celebrates its tenth anniversary – have included David Dickinson (BSIA), Stuart Lowden (Wilson James), Baroness Ruth Henig CBE (former chairman of the Security Industry Authority) and Skills for Security.

In 2010, a posthumous award was made to Jǿrgen Philip-Sǿrensen CBE MA (JPS) – a man recognised as the founding father of the security world.

In 2012, DAC Janet Williams QPM (then of the Metropolitan Police Service) deservedly won the trophy. Janet’s tremendous work in helping to realise a more effective communications and working relationship between the police service and the private security sector were duly noted and honoured.

Other reasons for The Security Institute’s success included: