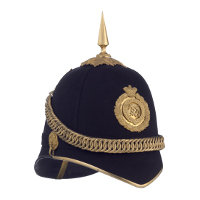 A helmet belonging to Captain Sir Edward Walter has successfully returned to the company he started over 150 years ago. Corps Security is now the proud owner of this precious artefact after bidding at a military auction.

Captain Sir Edward Walter (1823-1904), a retired officer of the 8th Hussars, founded what was originally known as the Corps of Commissionaires in 1859 as a way to provide gainful employment for ex-servicemen on return from the Crimean War. Walter believed that they could perform, through their military knowledge and qualities, a vital role in protecting the financial houses of City of London – the world’s financial and commercial capital.

With its motto of ‘loyalty, integrity, service’, the Corps of Commissionaires quickly gained a reputation for the high standard of its operation and soon other companies started to request its services. Its original qualities have remained with the company to this day and its ethos of caring for ex-soldiers, sailors and airmen has also continued, with a high percentage of the company’s workforce having previously served within the Armed Forces.

Corps Security was alerted to the sale of Walter’s helmet via Bosleys Military Auctioneers, a leading international specialist auction house dealing with every aspect of military antiques, from uniforms to medals and even campaign furniture.

The company’s owners, Steven and Sally Bosley explained, ‘Our own relationship with Corps Security goes back many years and we use its manned guarding services whenever our auctions take place. As soon as we established the provenance of the helmet we made contact with Corps Security to let them know that it was up for sale and to invite them to bid for this unique item from the earliest days of the company.’

The striking headpiece is modelled on the British Army Home Service Pattern helmet and features a variety of decorative features including a bright gilt oak leaf crowned wreath, enclosing a title strap with the Corps device placed in the centre.

As soon as Corps Security’s chief executive, Peter Webster, heard about the availability of the helmet he was determined to secure its purchase. He commented, ‘Without Captain Sir Edward Walter, Corps Security would simply not exist. The opportunity to own such a rare item was one that could not be missed and I’m pleased to say that we made a successful bid.’

After the auction had taken place the helmet was transported back to Corps Security’s headquarters in London, where it will be put on display.