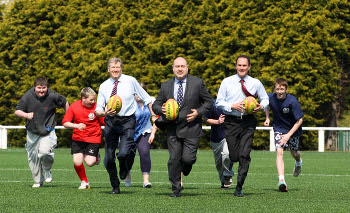 Falkirk teenagers met stars from the Scotland rugby team and Minister of Justice Kenny MacAskill at a special event at Murrayfield Stadium yesterday to celebrate their achievements in the G4S sponsored Street Rugby Referral initiative.

Today’s milestone gathering co-incided with the beginning of Scotland’s summer tour to Australasia and saw players train in front of an eager audience of children and engage in a question and answer session, before heading to the airport for their flight.

Scottish Rugby has benefited from support from the Scottish Government’s CashBack for Communities scheme, the umbrella through which G4S Street Rugby and Street Rugby Referral programmes and CashBack Schools of Rugby operate.

Scotland head coach Andy Robinson said: “It’s great to have the youngsters as our guests today at Murrayfield. Rugby has inspired many of us and I hope that learning lessons out here on a rugby pitch will stand them in good stead whether in their classroom or their community and for the rest of their lives. “

The Schools of Rugby initiative was launched in 20 secondary schools across Scotland this past season. A package of resources enables more staff to deliver a thriving rugby programme across the school both curricular and extra-curricular with a particular emphasis on second year pupils.

Designed to help children from disadvantaged or challenging backgrounds across Scotland learn more about the sport of rugby and its values, including teamwork, respect and fairness, Street Rugby is an initiative led by G4S – the UK’s leading security provider – and local government across the country.

Street Rugby is a portable and flexible version of non-contact rugby which is taught in all 32 local authority areas and has been attended by more than 18,000 young people since it began in 2008.

Since 2011, the scheme has developed further with a focussed Street Rugby Referral programme which allows groups of young people to be identified and referred onto the project by support workers or teachers.

Eric Alexander, Managing Director of Events at G4S Secure Solutions which provides the equipment, said: “This scheme has proven to be one of the most effective means of strengthening communities and improving the education of Scotland’s young people through a team sport that teaches vital life lessons which will help them once they complete the programme.

“Teamwork is at the heart of our business and we are proud to sponsor an initiative which teaches this ethos and improves the lives of those in the local areas where we operate.”

“Meanwhile, G4S Street Rugby is making a difference to many young people and their communities across Scotland, offering them a positive activity in their neighbourhood which diverts them away from anti-social behaviour or worse.

“Young people who have found themselves in trouble, or have come from a challenging background, are being given the opportunity to develop positive behaviours and gain skills and qualifications which can help them stay in or progress into training and education. We are grateful for all the support in allowing this project to thrive.”

Justice Secretary Kenny MacAskill said: “We are a proud and committed supporter of Scottish rugby. That’s why we are delighted to be investing £3.65 million into rugby from 2011-14 through our CashBack for Communities programme, which sees cash confiscated from criminals increasing opportunities for youngsters and keeping them out of trouble.

“Today marks a great opportunity for young people who have got involved in rugby thanks to CashBack to see what can be achieved, by meeting Scotland’s rugby stars who are performing at the highest levels of the game. We all wish them well as they prepare for their summer tour.

“Putting funds into grass roots rugby is one strand of our massively successful CashBack for Communities programme, which makes crime pay by taking cash from crooks. In total across all projects some £46 million has now been committed since 2007 of which some £25 million has gone into sport.”

Gillian Wilson, head teacher at Falkirk Day Unit – a school that supports young people who have struggled in the mainstream education environment due to social, behavioural or emotional issues – hailed the impact the G4S Street Rugby Referral Programme is having.

“It’s been a revelation,” she said. “I would never have thought that this could have been the runaway success that it has. Our kids will vote with their feet but even some of those who are due to leave school have asked if they can stay on so they can do the rugby sessions.”

One of the pupils, 16-year-old Chloe, said: “I enjoy it, especially the tackling. I’ve learned about team-work and the running keeps you fit.”