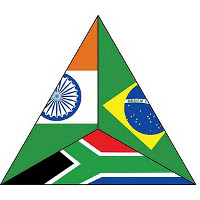 “The India-Brazil-South Africa Dialogue Forum (IBSA) is a coordinating mechanism to deepen cooperation in various areas amongst three emerging global players. IBSA countries have also been intensifying their defence industry collaboration with each member of the triangle having some state-of the-art defence technologies/products.

“Brazil is expected to introduce a new military jet lifter KC-390 soon while South Africa is already producing excellent artillery systems – G6 self-propelled howitzer, RG-series of mine resistant ambush protected armoured vehicle and some guided missiles. India co-developed with Russia BrahMos – a supersonic cruise missile,” notes Frost & Sullivan Industry Analyst Dominik Kimla. In addition, Brazil and South Africa has been developing A-Darter – the 5-th generation short range, air-to-air missile system. The A-Darter is a $120 million research and development programme with the final missile delivered to air forces in next year. “Although, the defence industry cooperation among the IBSA partners is still on the initial stage, the success of the A-Darter project may increase future cooperation in the defence industry area not only between Brazil and South Africa but among all members of the IBSA,” he adds.

“Although South African defence spending seems to be relatively limited in comparison to Brazilian and Indian expenditures, the country can still share its wide experience in developing indigenous defence sector. “This know-how is very valuable because development of domestic defence sector is one of the key priorities in both partnering countries,” says Mr. Kimla. “With Brazil and India being engaged in a significant modernisation process of their armed forces, and transfer of technology being an essential part of all new defence deals, South African’s know-how can support them to build their defence sectors more efficiently.”

“Furthermore, the maritime sector seems to be another promising area of cooperation among IBSA countries. Brazilian and Indian Navies are in the process of vessels replacement while South Africa has gained experience in operation and support in service of modern vessels such as MEKO class frigates and Type 209/1400 submarines. Besides, South Africa’s central location between Indian Ocean and Atlantic will give a strategic dimension to cooperation between IBSA partners. An example here would be IBSAMAR – a joint Brazil-India-South Africa naval exercise, which is conducted every second year since 2008.

“Traditional defence original equipment manufacturers (OEM) from the US, Western Europe, Russia and China should keep an eye on the IBSA defence cooperation, because if these initiatives are pursued further, the trilateral defence cooperation would significantly impact the global defence industry in long term perspective,” summarises Dominik Kimla. “It is expected, that the IBSA’s defence sector(s) will play a much more significant role in the third decade of the century.”

Dominik Kimla is an Industry Analyst for Aerospace, Defence & Security group at Frost & Sullivan. If you would like to speak to Dominik directly, please contact Joanna Lewandowska, Corporate Communications, at Joanna.lewandowska@frost.com