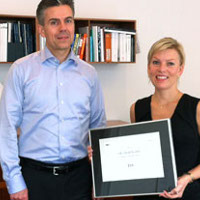 Every year the Confederation of Danish Industry (DI) and the Association of Danish Auditors (FSR) award the best annual reports of the year. This year, ISS was nominated for two awards.

In addition to the overall Annual Report Award, three special awards were given. These awards were given for setting a good example for annual reports, having a professional gravity, and addressing the demands of the readers. The three awards were called: ‘The Overview – internal controls’, ‘The Detail – impairment of goodwill’ and ‘The Future – segment information’. In addition to being nominated for the overall Annual Report Award, ISS won The Detail Award.

Peter Harder Thomsen, Head of Group Controlling at ISS, said:
– We are very grateful for the award. This is indeed a welcome appreciation of the hard work a lot of people have put into the annual report and once again underlines the high quality of our annual report.

DI describes the award criteria for The Detail Award:
– When choosing the nominees for this award focus was on how the company presents the annual impairment test of goodwill, including the description being presented clearly, and whether there is a connection between the presentation of the impairment test, the description in “Critical accounting policies and accounting estimates and assessments “as well as the Management Review.

The winner of the award was decided by the participants at the award conference following a 1 hour open debate where the three nominees (ISS, Carlsberg and Danske Bank) answered questions from an expert panel. ISS received 49% of the votes.