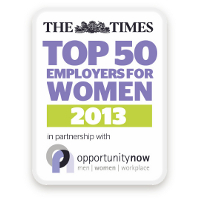 MITIE announced today that it has been named as one of The Times Top 50 Employers for Women, for the third consecutive year.

The FTSE 250 strategic outsourcing company places huge importance on attracting, developing and retaining the best female talent, and providing a supportive and inclusive environment for its people.

Inclusion in the list demonstrates that MITIE has displayed strong leadership in gender equality, embedding a culture of diversity in its business strategy and throughout the organisation.

MITIE recognises diversity as a key differentiator within the FM sector and has maintained a focus on gender balance through involvement with external schemes promoting equality.

These include a partnership with charity Working Chance, to assist women offenders in making the transition back into work, and a targeted campaign to encourage women into under-represented trade apprenticeships such as plumbing, electrical, and construction.

MITIE has also implemented several other initiatives to further develop a progressive culture within the organisation.

These include a dedicated maternity coaching programme and focus on flexible working to retain female talent, a company wide mentoring programme, and an externally chaired diversity steering committee, supported by a network of diversity champions throughout the organisation.

“We are thrilled to be included in the Times Top 50 Employers for Women for the third consecutive year.“As MITIE grows as a business, it is only by harnessing our diversity of talent that we will continue to succeed. Providing an environment of support and inclusion for all of our people is integral to nurturing talent and ensuring MITIE is leading the way in our commitment to diversity.”

Ruby McGregor-Smith, the first Asian women to lead a FTSE 250 company, also set up and remains involved in a mentoring circle for black, Asian and minority ethnic women, aimed at inspiring women to fulfil their potential and break through the ‘glass ceiling’.

“All organisations included in The Times Top 50 Employers for Women must be praised for their commitment to the recruitment, retention and progression of their female talent.”

“The high number of entries and high calibre of comprehensive activity made the judging process extremely competitive, but it is clear that this year’s Top 50 are leading the charge on organisational and cultural change, embedding accountability and delivery of activity at all levels, from the CEO to line managers.”