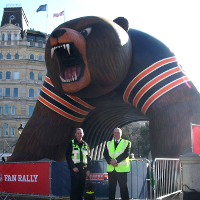 When up to 12,000 American football fans visited London’s Trafalgar Square for a free promotional event this autumn, crowd management specialist Integrated Security Consultants (ISC) was responsible for ensuring their safety. The event was organised by the USA’s National Football League (NFL) in the run up to the match between the Tampa Bay Buccaneers and the Chicago Bears at Wembley Stadium. ISC also protected visiting celebrities including Hollywood star Cuba Gooding Jr. and the cheerleading team for the Tampa Bay Buccaneers.

As part of a London-wide publicity campaign for one of the largest matches ever staged by the NFL outside the US, Trafalgar Square hosted a free ‘Movie Night’ on the Friday night, where up to 4,000 fans watched a screening of the film ‘Jerry Maguire’, introduced by Gooding. The following day, a ‘Fan Rally’ was attended by some of the team members, with performances by the cheerleaders, the Chicago Bears’ drummers and NFL Hall of Fame members, plus a display of the NFL’s famed Vince Lombardi Trophy, alongside players’ NFL commemorative rings, which ISC also safeguarded.

“On the Saturday we expected up to 12,000 people through the gates in total, with around 5,000 at any one time,” says Mick Smith, ISC’s Security Operations Manager. “As the NFL’s security supplier in the UK we oversaw all aspects of safety and security of its personnel and assets while here in the UK.”

At the public event, ISC was responsible for ensuring safe crowd ingress and exit at Trafalgar Square, working to the NFL’s strict security code, while keeping crowd levels below the licensed maximum and maintaining good crowd behaviour.

“We used our own employees and also managed staff from another security provider, appointed by Westminster Council,” says Smith. “There were a number of security concerns in London at the time. As well as the ever-present terrorist threat, there were anti-globalisation protesters in nearby St Paul’s who were talking about a move to another location. The NFL also has stringent rules about searching guests, including the use of pat-downs. We vetted everyone to make sure nobody was carrying anything inappropriate, which included checking rucksacks for banners and tents. We also monitored crowd numbers to ensure capacity wasn’t exceeded”

According to Smith, a proportion of visitors were passers-by, curious about the spectacle in the square. “Trafalgar Square is a popular tourist destination and a vast number of people decided to join the queue to see what was happening,” says Smith. “The operation went smoothly throughout the day; although alcohol was on sale, the crowd were very good natured and there were no incidents of drunkenness or disorderly behaviour.”

Both during ingress and egress, ISC had to be aware of the needs of local businesses. “Upon the event’s conclusion, we converted all entrances to exits and marshalled people to avoid congestion and disruption to shop premises. The event finished at 5.30pm and just 15 minutes after announcing closure, we ensured the site was successfully cleared of all visitors.”

The day after the ‘Fan Rally’, ISC moved its operation to Wembley Stadium for the pre-match ‘Tailgate’ party. “Many of the attractions were transported overnight from Trafalgar Square to Wembley,” says Smith. “There were tight deadlines to get everything in place for Sunday morning. Features included a VIP area, a mini field, cheerleader displays, appearances by former players, a merchandising stall and the Hall of Fame. It was the largest tailgate outside the US.”

“Feedback from the NFL was good,” he adds. “They believe the event went well and contributed to an increase in ticket sales. Due to its success, we’re hoping they will decide to visit again next year.”