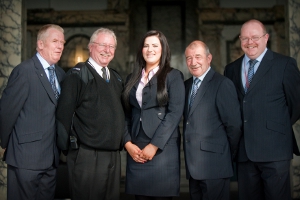 A security team from MITIE, the FTSE 250 outsourcing and energy services company, has been crowned winner of MITIE Stars and awarded a prize of £15,000.

MITIE Stars is an annual awards scheme open to its 62,000+ employees which highlights the talent of MITIE people in their everyday jobs and celebrates those that go the extra mile to meet the needs of clients and colleagues.

Described as ‘ambassadors’ in their place of work, this year’s winning team was responsible for securing Liverpool’s iconic Royal Liver Building with front of house services and security officers. The team was nominated for acting with pride to represent the culture and heritage of Liverpool and going beyond what is required to protect the prestigious building.

The winners were also applauded for their passion and dedication to their client. working overtime to ensure the smooth running of weekend and late evening events, including charity events and ministerial visits. It is the integrated team approach to deliver for their client which won them the award – MITIE worked closely with their client and they operated as a single, seamless team.

The team of ten has decided to split the £15,000 prize, and plan to use it to pay for special Christmas presents for their children and grandchildren and dream holidays for their families.

Client Peter Fane, who is head of Property Royal Liver Assurance Limited: “The team is dedicated to looking after our tenants and visitors and we’re delighted that our successful partnership with MITIE has earned the team praise and recognition.

It is fitting to have a leading security team looking after Liverpool’s most iconic building.”

Ruby McGregor-Smith, Chief Executive Officer for MITIE commented: “Every year I am inspired by our MITIE stars. I know there can only be one winner but the Royal Liver security team do an exceptional job and I’m delighted to recognise their hard work and significant achievements.”