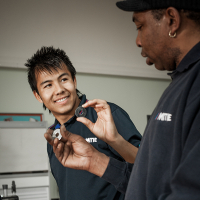 MITIE Group PLC is delighted to announce it has been named as one of the top ten private sector organisations for ethnicity in the workplace by Race for Opportunity and Opportunity Now, the race and gender campaigns from Business in the Community (BITC).

MITIE was commended by BITC for several current initiatives including some around recruitment and career progression, workplace policies and practices, plus its work in the community.

In particular, MITIE’s network of diversity ‘champions’ was recognised as an excellent example of making a difference on gender and race, both in an internal and external capacity.

MITIE’s programme to encourage women to return to work and develop their careers after taking maternity leave, as well as chief executive officer Ruby McGregor Smith’s involvement in a mentoring circle for black, Asian and minority ethnic women were also highlighted as key initiatives.

The unranked lists are the culmination of the UK’s most comprehensive Benchmarking Survey into how organisations are performing on race and gender equality, diversity & inclusion in the workplace.

Sandra Kerr OBE, director of Race for Opportunity, said: “For organisations committed to diversity, equality and inclusion in the workplace, the Benchmark is a clear signal of which organisations are delivering best practice.”

The Benchmark also recognised MITIE’s public commitment to the campaign through involvement in Opportunity Now, Race for Opportunity and also the Women’s Business Council, which is chaired by Ruby McGregor-Smith, the first Asian woman to head a FTSE 250 company.

Ruby McGregor-Smith CBE, Chief Executive of MITIE, said, “Having a talented and diverse workforce is critical to our business and we are passionate about diversity in its broadest sense. We are thrilled to have been recognised by Race for Opportunity and Opportunity Now for our continued commitment to diversity.”