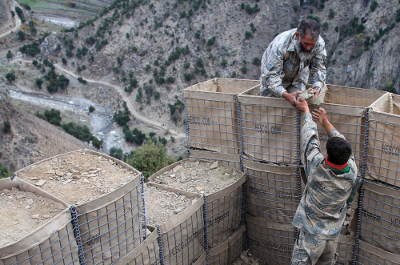 A stunning array of photos capturing the drama of troop deployment in Afghanistan dominated entries to the 2011 annual HESCO photography competition.

Open to all, the challenge was to capture the spirit of protection offered by the HESCO protective barriers in the most creative way.

The near-universal application of HESCO barriers by forces in Afghanistan, sometimes in the unlikeliest of locations, gave full rein to photographers with an eye for the unusual.

The winner was SPC Tia Sokimson of the US Army’s 55th Signal Company, whose high altitude photo captured members of the Afghanistan National Security Forces filling HESCO units with rocks to build a defensive position at Outpost Fawlad in Naray District, Kunar Province.

The entries were judged by British artist David Cotterell, professor of fine art at Sheffield Hallam University and a renowned installation artist.

Professor Cotterell said: “SPC Sokimson’s composition is considered and it offers a great sense of the extraordinary landscape. It captures a quiet anonymous moment and seems to pay tribute in an understated way to the challenges of living and working in this bleak environment.”

SPC Sokimson wins a Harley Davidson FatBoy motorbike and was stunned when he was informed he was the winner. Currently on overseas deployment, he said: “I have no words for it! I just need to simmer down. A big thank you to the judge and most of all to HESCO!”