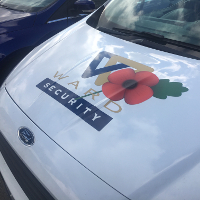 A fleet of Ward Security vans are displaying poppy stickers in support of the Royal British Legion’s annual Remembrance day appeal and to show respect for the 100th anniversary since the First World War. National security provider, Ward Security will display the poppy logos on its fleet of vehicles as well as make a financial donation to the Royal British Legion local Chatham branch.

David Ward, Chief Executive Officer at Ward Security said “The Royal British Legion do an incredible job of supporting Armed Forces personnel past and present and their families. Like many people we had relatives that fought in the First and Second World Wars and we continue to have close connections to the military and those currently serving. Many of our employees are also former military personnel. We believe it is right and important to continue to support the appeal and by putting the poppy on our fleet of vehicles helps keep the campaign visible and in the public eye.”

Ward Security was founded in 2000 by brothers Kevin and David Ward, today it employs over 900 people and provides security solutions to companies nationwide. Originally, based on the Medway Trading Estate, the company’s new headquarters were officially opened earlier this month in the Fitted Rigging House at the Historic Chatham Dockyard, Kent.