The awards serve to recognise the achievements of Level Two and Level Three apprentices involved in the installation of alarms, CCTV, access control or a combination of these systems, and represent the commitment of security companies and training bodies in providing young talent with the opportunity to succeed in the security industry.

“We are all well aware that in today’s challenging job market many young people may feel that a long term career is out of their reach” commented James Kelly, Chief Executive of the BSIA. “As such, the BSIA and its members fully support the development of apprenticeships which offer positions to young people who wish to gain practical skills and knowledge in the security industry, allowing them to ultimately develop long-term careers in the sector.

“It’s always a pleasure to be able to recognise the outstanding talent displayed by our young apprentices, and this year the calibre of nominations was so exceptional that the judges felt it impossible to choose between two outstanding individuals. For that reason, we have chosen two joint overall winners. Both apprentices have exhibited exceptional qualities throughout their apprenticeships, and no doubt have a very bright future within our industry.” 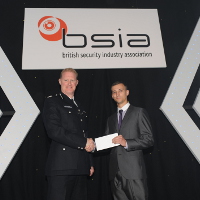 Ryan, 23, is a Level Three apprentice at Chubb Fire and Security Ltd. Since beginning his apprenticeship in September 2010, Ryan has excelled in all aspects of his work and is dedicated to delivering the best service to his customer.

His coursework is always completed to a high standard and he even takes manuals home the night before an installation so he may be as familiar as possible with the equipment being used. He is described by colleagues as a resourceful and reliable individual, taking on any challenges in his stride and meeting them with growing success.

“Ryan demonstrates large amounts of initiative and common sense, and we are proud to have him as part of the team. We have great confidence not only in his technical abilities, but also with the commitment he shows towards customers and colleagues alike,” said Dave James, General Manager, Chubb Fire & Security.

Jack, 17, is only a first year apprentice at CTM Fire and Security, part of the Thompson Group, and has already made an extremely positive impression amongst his colleagues and customers.

With aspirations to be in senior management by his early 30’s, Jack dedicates a lot of his time to his apprenticeship, already undertaking additional reading and research outside of normal working hours to expand and broaden his industry knowledge.

To further improve his system specific knowledge and work performance, Jack also takes the time to obtain and study relevant product manuals to familiarise himself with different systems and their full capabilities. He has been noted by colleagues for his attention to detail and positive customer focused attitude, which have allowed him to quickly gain the customer’s trust and confidence.

Speaking about Jack’s progress, Mark Cunningham, Assessor at Skills for Security, said: “Jack has established himself as a reliable, hard-working member of the company, gaining the respect of both his peers and management colleagues with his pleasant manner, knowledge and capabilities going well beyond what they would normally expect from an apprentice at such an early stage of his career.”

Ryan and Jack were presented with their awards by Commander Steve Rodhouse, Commander for Gang and Organised Crime for the Metropolitan Police, at the Association’s Annual Lunch hosted at the London Hilton on Park Lane.

The BSIA would like to take this opportunity to thank Pyronix Ltd for their kind sponsorship of these awards.

The BSIA is also a proud supporter of the 100 in 100 campaign, which aims to place 100 new apprentices in the security sector in 100 days. Over the last two years, 550 apprentices were employed by the security sector, and the scheme is looking to improve upon this in 2013. To find out more, visit http://www.skillsforsecurity.org.uk/index.php/happening/2/266.