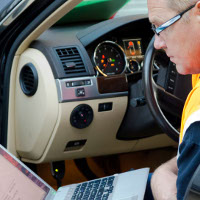 Vehicle crime experts from 20 EU countries gathered at Europol headquarters on 11 and 12 September to work on “Operation Cycar”. This successful operation resulted in 160 stolen vehicles being seized and 75 people arrested. Results are still being gathered so the final figures are expected to be even higher.

Officers coordinating the case at Europol were working from state-of-the-art operations rooms supporting thousands of EU police, customs and border guards involved in “Operation Cycar”. European law enforcement officers were working at borders, ports, car dealers, back-street workshops and scrap-yards, following up advertisements on the internet, investigating burglaries and robberies in which high value cars were stolen, and searching for the specialist criminal gangs that roam across Europe stealing high value vehicles.

The operation produced some excellent results in EU Member States, in particular:

The challenge for police, customs and border guard experts dealing with international vehicle crime is to get answers quickly and to speak to experts in partner countries that understand the tactics and tricks that disguise a stolen car and, if understood fully, can reveal its original identity. National experts gathered at Europol were supported by experts from Interpol and TISPOL (the European Traffic Police Network) and had access to a wide variety of databases to help establish whether or not a vehicle is stolen. TISPOL colleagues from The Netherlands brought their special TDS (Traffic Dialog System) database of documents associated with vehicles – especially vehicles travelling across international borders or being imported or exported. The Swedish expert provided expertise on the Volvo model range and German experts had access to special data on cars manufactured in Germany.

Operation Cycar is an initiative of Cyprus under its Presidency of the Council of the EU, and is supported by Europol, Interpol, TISPOL and Frontex targeting organised vehicle crime throughout the European Union.