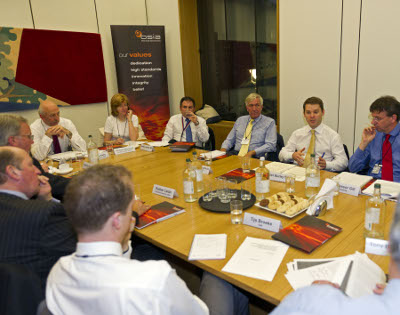 The British Security Industry Association (BSIA) hosted a lively roundtable meeting in the Houses of Parliament on Tuesday (22nd November), bringing together Parliamentarians from across the political spectrum to discuss the future of policing and the role of the private sector in delivering essential services.

Chaired by Aidan Burley MP, the discussion generated a lively debate that took into account the benefits and perceived drawbacks of increased partnership working between the Police and the private security industry, and raised important questions about the impact of next year’s Olympic Games, the effects of public sector budget cuts and the introduction of elected Police and Crime Commissioners.

Attendees at the event included Baroness Henig, Chairman of the Security Industry Authority (SIA), alongside Baroness Harris, Vice President of the National Association of Police Authorities, Victoria Borwick, Member of the Greater London Assembly, Tom Brake MP and Jack Lopresti MP, who is himself an SIA licence-holder.

The BSIA’s President, Sir Keith Povey QPM, and BSIA members were also on hand to give real-life examples of successful partnerships between the police and private security, including community warden schemes, custodial services and prison operations.

Robbie Calder, Chair of the BSIA’s dedicated Police and Public Services section, commented: “At present, our police officers perform far too many tasks that don’t necessarily require the presence of a warranted officer, for example, managing cordons, area searches and taking witness statements. The introduction of a new era of regulation, including company registration, will hopefully serve to increase police confidence in working alongside our industry.”

The wider issue of elected Police and Crime Commissioners, due to be introduced across the country in 2012, was also discussed as a potential turning point in the relationships between the police and private security service providers. One of the key roles of commissioners will be to reduce costs and streamline operations within each force, areas which the private security industry can contribute to immensely.

Noting that the BSIA already enjoys good relationships with many police forces, as well as ACPO itself, the BSIA’s Chief Executive, James Kelly, has pledged the Association’s commitment to driving this issue forward in 2012.

He comments: “We were delighted to see such a high level of interest in this issue from representatives across Parliament, and the points that were raised in this discussion were certainly thought-provoking. With the introduction of elected police commissioners and the economic implications of partnership working, there has never been a better opportunity to make a positive change and explore this issue further. The private security industry, led by the BSIA, will take a strong stance to continue this debate and improve awareness of the industry’s integrity, professionalism and capability to deliver this essential service.”

To find out more about the Association’s Police and Public Services section, visit www.bsia.co.uk/pps

For more information on the work of the BSIA and its members, visit www.bsia.co.uk