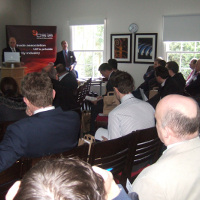 A series of informative seminars delivered by the British Security Industry Association (BSIA) have resulted in Association members feeling “better informed” about the marketplace for PD6662, the scheme for the Application of European Standards for Intruder and Hold-Up Alarm Systems.

Held at nine venues across the UK in January and February, the seminars were designed to prepare BSIA members for the ongoing changes to the standards affecting manufacturers and installers of intruder and hold-up alarm systems, in particular the impact of the revised PD6662 scheme, which is now nearing the end of its two-year changeover period following publication in May 2010.

Leading manufacturers were also on hand to at the seminars to answer questions and demonstrate the many products that will be affected by these changes.

A post-event survey of attendees has revealed that 100% of respondents to date felt that the seminar was of benefit to them, and that they now feel better informed about the marketplace for PD6662.

BSIA Technical Manager, David Wilkinson, explains: “As the new PD6662 has now replaced the 2004 version, our presentations were aimed to guide members through the two-year changeover period between the 2004 and the 2010 versions. One of the most important new standards included in the scheme is BS8243, which will replace DD243 going forward, and the BSIA’s briefings highlighted the numerous differences between DD243 and BS8243, including the inclusion of hold-up alarm confirmation for the first time.”

The BSIA is at the forefront of standards development and represents the UK security industry on International, European and British Standards committees. This representation allows members to have a voice on how their industry develops. Where the industry lacks standards, the Association’s members develop their own codes of practice, which are often then used by the British Standards Institute (BSI) as a benchmark for the wider industry.

Another series of seminars are now being planned for later this year, and will be opened up to non-members of the BSIA for the first time. Anyone interested in attending can find out more by contacting the BSIA’s Events Manager, Christine Brooks, on 0845 389 0743 or by email at c.brooks@bsia.co.uk

Standards representation and guidance is just one benefit of BSIA membership. To find out more about the work of the BSIA and the many other benefits of joining the Association, visit www.bsia.co.uk.