Officers from across the Metropolitan Police Service attended Hendon Police College today where they were commended by the Commissioner in front of their friends and families.

In the ceremony, the Commissioner, Bernard Hogan-Howe, commended officers for their bravery throughout the disorder in August.

Commissioner Bernard Hogan-Howe, said: “Today I have presented Commissioner Commendations to the police officers who were courageous and professional during the riots and disorder in London, they put themselves in danger to protect the public, London Fire Brigade and colleagues. I am very proud of them.

“Faced with the challenging and unprecedented events during those few days in August. Their willingness to do everything they could to stop the overwhelming criminal activity they were confronted with was rightly recognised by the overwhelming public support in the following days, it gives me great pleasure to honour their dedication and courage with the Met’s highest accolade.”

Commendations were made for the work of officers facing unprecedented violence. 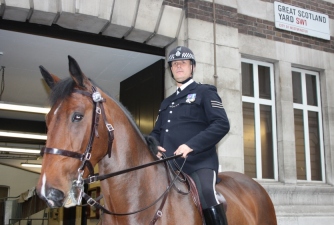 Mounted Branch officers were commended for their actions on the night of Saturday 6 August. The 10 officers and their horses had been on duty in Tottenham for a scheduled football match and were on their way back to their stables when they became aware of the disorder in Tottenham and volunteered to attend. Having ensured the horses had been fed they made their way to Tottenham High Road, where there was serious disorder taking place. Over the course of six hours, the officers and their horses came repeatedly under attack, with fireworks and missiles being thrown at them. They pushed crowds back to relieve the pressure on the officers on foot and create space for the fire fighters to fight the numerous fires.

Officers from the Dog Unit were directed to Tottenham from across London, on arrival the police dogs and the officers responsible for them, were deployed to assist. They remained there for six hours, coming under attack from missiles including petrol bombs. A number of the dogs sustained cuts to their paws and two received serious injuries, both are recovering. Police dog Obi, who sustained a fractured skull has been nominated for an Animal Bravery Award.

Officers from Sutton, all Level 2 public order trained, were deployed to Tottenham High Road on Saturday 6 August, when they arrived they discovered burning barricades, with officers trapped and injured and still under attack from missiles which appear to have been collected from a nearby building site. The officers went in repeatedly to extract injured officers, using their shields as protection, and got officers and members of the public out, including a press photographer who had found himself caught up in a group of rioters. When they were eventually released from Tottenham High Road, they volunteered to attend Tottenham Hale retail park where they arrested eight suspects for burglary and looting.

Officers from Haringey, the Territorial Support Group, Kensington & Chelsea and one from Hounslow were commended for their actions in Tottenham High Road on Saturday 6 August. All of the officers came under attack over a number of hours, their first job was to get officers and members of the public away from the main disorder, especially those who had been injured. A line was established to ensure the LFB could access burning buildings, this then continued most of the night, with officers establishing new routes for the LFB as further fires were set. At 03:30hrs when the officers were able to leave the area as further officers replaced them, all were physically exhausted and many carrying injuries.

Seven officers from Southwark made national headlines when they were pictured catching a woman as she leapt from a burning building on Monday 8 August. The officers had initially been deployed to Church Street, Croydon, when a member of the public told them that there were people in a burning building. They followed the man to the building where they went to the door of a flat and carried family members out to safety, using their shields to protect them from the heat of the flames. When they returned to the building they were alerted to a woman at the window of a flat. The officers used fabric and cushions to cover the floor and then encouraged the woman to lower herself before dropping towards their waiting arms. The officers used fire extinguishers to tackle small fires and helped members of the public carrying buckets of water to put out fires. When they left the burning building they went to a nearby shop where they arrested six people for looting.

Further officers from Southwark and the Safer Transport Command were commended for standing firm when faced by a crowd of 200 on Walworth Road, Sutton. The officers held the crowd back stopping them from reaching other offenders who were looting premises. The officers, who were initially in standard uniform and had no protective clothing, remained in place despite coming under attack from missiles, including lumps of concrete. The officers who were public order trained were directed back to the police station to get their protective equipment to return to confront the group and disperse them, in the process extracting a man who had been stabbed and administering first aid whilst awaiting medical assistance.

Chief Superintendent Guy Ferguson from Sutton and 13 of his officers, as well as a member of police staff who is a CCTV operator, were commended for their work in Sutton on Monday 8 August. The officers held back a crowd of over 70, repeatedly charging at them to move them away from commercial premises despite coming under attack from bottles being thrown. The tactic eventually caused the group to split up and disperse but thanks to the work of the CCTV operator many of the offenders have since been identified.

The ceremony gave the Commissioner an opportunity to thank the officers and their families for their dedication and support.