Brian Ocaya and Daniel Collins have been sentenced at the Old Bailey in London, for a cash theft at a Lloyds TSB branch in South London where the cash was rendered useless by groundbreaking technology.

It’s the first time there has been a successful conviction of cash-in-transit (CIT) crime where glue technology has been used. This is a cutting edge system built into cash boxes to bind and prevent use of the contents.

The technology is the very latest to be used by the security industry to tackle crime in the UK. It works by releasing glue inside the cashbox when someone tries to open it. Should the person try to recover the notes, the process will cause them to delaminate, rendering the bank notes in the cashbox completely unusable and of absolutely no gain to the perpetrator. 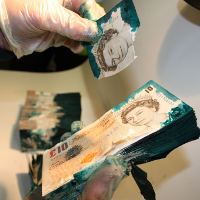 The glue also contains existing technologies in dye, which stains the notes, and SmartWater, a forensic solution invisible to the naked eye but detectable under UV light.  The DNA-style code within SmartWater contaminates the person that has breached the cashbox for up to six months and will link the individual to a specific attack. The solution has a 100 per cent conviction rate when used as evidence in criminal cases.

Use of this technology has played a key role in detecting perpetrators of CIT crime, helping to bring them to justice while acting as a clear deterrent to potential criminals. Due to the investment in technology and as a result of the strong working relationship between the Met and the security industry, the number of CIT crimes in London has dramatically reduced.

Detective Superintendent, Nick Stevens, from the Flying Squad said: “This is a fantastic result for the Flying Squad working in partnership with the cash in transit industry using the latest technology to arrest and convict criminals. The conviction should assist in deterring other criminals who think that committing cash in transit robberies are a quick and easy way to get cash. This latest technology is a new weapon in the fight against cash-in-transit robberies and adds to the Flying Squad’s already excellent partnership work with the industry which has seen the number of such robberies consistently fall significantly year on year. “Gavin Windsor, Risk Director at G4S added: “In recent years, there has been a dramatic reduction in the number of cash robberies, and a contributing factor is the close working relationship that the security industry has with the Met to tackle crime. The shared intelligence and continued introduction of new technology means that the chances of being caught and convicted are higher than ever. It’s particularly pleasing to see from this case how the recently-introduced glue solution in cash boxes ensures that any money stolen becomes completely unusable for the criminal, effectively removing any reward for committing CIT crime.”