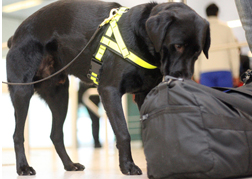 The hidden £9.9m in cash, which was detected by dogs based at the UK’s airports and ports, was seized by UK Border Agency officials in the last financial year.

One of the dogs, a Labrador Retriever called Buster, works at Gatwick Airport and is one of 19 specially trained currency detector dogs which routinely check passengers and cargo and sniff out suspicious quantities of bank notes.

Gavin Edwards, Buster’s handler, said: ‘We ask the passengers how much money they are carrying, depending on what they say, that person is then investigated by another officer. Depending on whether there are any relations to crime, we would then seize the money.’

Currency detector dogs were first used in the UK in 1999. Initially two dogs were based at Heathrow Airport to search passengers’ baggage and freight leaving the country.