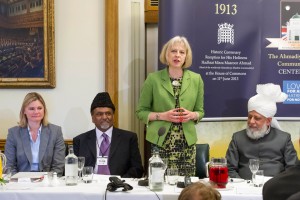 Home Secretary Theresa May praised the work of the Ahmadiyya Muslim Association at an event marking its hundredth year in the UK.

Speaking in the House of Commons on Tuesday (11 June), the Home Secretary said the organisation’s philosophy of ‘Love for All and Hatred for None’ was exemplified by its condemnation of the horrific murder of Drummer Lee Rigby in Woolwich.

“Extremism cannot and will not be part of Britain so long as we remain an open and tolerant society.

I have no doubt that together we shall defeat the extremists. You have shown, and continue to show, that the only effective way of persuading them out of their poisonous convictions is peaceful dialogue”.

“I want to praise the great qualities of open-heartedness and tolerance exhibited by the British people, for the way in which they have accepted immigrants as members of the country and allowed them to become a part of the fabric of British society.

The Ahmadiyya Muslim community was founded in Punjab, India in 1889 by Hadhrat Mirza Ghulam Ahmad who said Islam’s true strength lay in its powerful message of peace. He also taught that Jihad was in essence an inner struggle for peace not a violent war as had been popularised by extremists.

Its first missionary arrived in the UK in 1913. Since then the Ahmadiyya Muslims have flourished, building one of Britain’s largest mosques in Morden and raising around £1.5million for British charities including regular Poppy appeals.