The private security industry has come under considerable international scrutiny due to the highly publicized role it has played in Afghanistan and Iraq.  Attention has mostly focused on questions concerning governmental oversight and these companies’ accountability according to the Small Arms Survey, an independent research project located at the Graduate Institute of International and Development Studies in Geneva, Switzerland, writes Bobby Logue.  Private Security Companies’ Firearms Stockpiles is based on a forthcoming chapter from the Small Arms Survey 2011 yearbook which examines private security companies (PSC) firearm holdings and their scale and variation across the world.

Information on PSC arms holdings is scarce and lacks precision. States that maintain firearm registration systems do not always distinguish between civilian- and PSC-held firearms. In some countries, PSC employees can carry their personal weapons while on duty, further complicating accounting. In other cases, personnel have been reported to carry illegal—thus unrecorded— firearms. These different factors make it particularly challenging to draw a comprehensive picture of PSC firearm holdings. 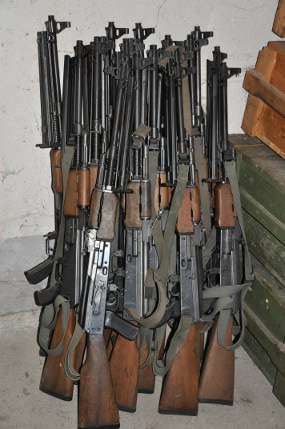 PSCs in Latin America appear to be more armed than in other regions. A survey of the industry in Europe reveals that the proportion of PSC personnel that is authorized to be armed is about 40 per cent in Bulgaria, less than 25 per cent in Slovenia, Spain and Turkey, and below 10 per cent in Croatia, Germany and Sweden.

Conflict-affected areas such as Afghanistan and Iraq experience much higher levels of PSC firearm holdings. In such settings, industry sources argue that maintaining weapon capabilities at least equal or superior to potential attackers’ is crucial. In practice, this translates into PSCs being armed at levels comparable to state security forces, as reports of more than three firearms per PSC personnel in Afghanistan illustrate. In contrast, law enforcement personnel worldwide hold estimated average 1.2 firearms per officer, while the military generally keep more than one and sometimes as many as ten weapons per soldier.

The Small Arms Survey serves as the principal international source of public information on all aspects of small arms and armed violence and as a resource for governments, policy-makers, researchers, and activists. The project has an international staff with expertise in security studies, political science, international public policy, law, economics, development studies, conflict resolution, criminology, and sociology. The staff works closely with a worldwide network of researchers and partners.

Images for this article have been supplied by Jasna Lazarevic of the Small Arms Survey.