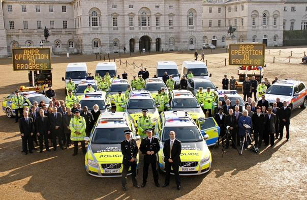 ANPR uses sophisticated digital technology to automatically detect the vehicle registrations of those committing or suspected of committing crime as they move around London’s roads.

From today, Tuesday, 9 October, all the information retrieved from ANPR equipped police vehicles and cameras will be fed into a new central ANPR bureau based at New Scotland Yard.

The ANPR bureau will essentially act as a MPS-wide radar for catching burglars, robbers and gang criminals on the capital’s roads and ensure its dedicated ANPR Interceptor Team and ANPR equipped cars are given the best intelligence to swiftly hunt down criminals using the roads.

Uninsured, untaxed and unlicensed vehicles on London’s streets are being targeted as the MPS uses ANPR to bear down on such vehicles and remove them quickly.

The new MPS ANPR Bureau will create a centre of excellence, allowing police experts to make instant deployments, as for the first time, all ANPR activity will be fed back into one intelligence source.

More than 110 ANPR vehicles currently patrol the city’s streets but this is due to be doubled by the end of the financial year.

Last year the Met made around 1,500 arrests using ANPR, which included arrests for robbery and firearms offences, drug trafficking and serious sexual offences.

The investment in ANPR technology has already worked to save valuable police time, resources and enquires to advance investigations and enforce arrests.

By working with our partners at TFL, ANPR was used to identify a private vehicle suspected of being used in a serious sexual assault. The ANPR hit led to the arrest and charge of a suspect in September 2012.

A vehicle suspected of being involved in money laundering was identified using ANPR technology and stopped in February 2012. Following a vehicle search three large bags of cocaine and a loaded firearm were found in a concealed compartment. The person involved has since been sentenced to six years imprisonment.

The new ANPR Bureau will work to bring all MPS ANPR activity and expertise under one roof for the first time and follows on from the success of Operation Cubo which takes hundreds of uninsured cars off the streets every month.