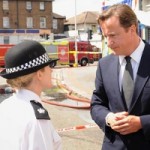 The riots were about “criminality pure and simple” David Cameron told Parliament today during the emergency recall to debate this week’s riot writes Infologue.com’s Bobby Logue.

“There were simply far too few police were deployed on to our streets and the tactics they were using weren’t working, Police chiefs have been frank with me about why this happened. Initially the police treated the situation too much as a public order issue – rather than essentially one of crime. The truth is that the police have been facing a new and unique challenge with different people doing the same thing – basically looting – in different places all at the same time.” Said the Prime Minister.

Demonstrating widespread public anger at the riots an e-petition on the Governments website calling for “Convicted London rioters to lose all benefits has reached over 97,000”votes by midday today. The Petition says “Any persons convicted of criminal acts during the current London riots should have all financial benefits removed. No tax payer should have to contribute to those who have destroyed property, stolen from their community and shown a disregard for the country that provides for them.” On Facebook a page “Supporting the Met Police against the London rioters” had received 979,266 “likes” (indications of support) by midday today.

Up to midday today the Metropolitan Police Service has arrested a total of 922 people in connection with violence, disorder and looting. 401 people have been charged.